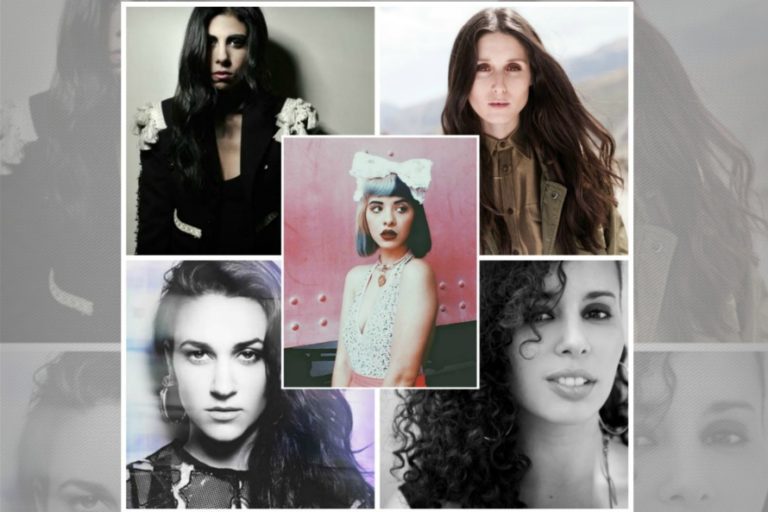 Here are my choices for five Latina singers on the rise. This month, Kathy really wanted to challenge me and really push me out of my comfortable zone. As I push all of you each month on trying out these new artists, I thought it was time for me to push myself a little bit more. In honor of International Women’s Month (every March), I wanted to do some research on the up and coming Latinas out there in today’s music scene.

Many people might not know, but the pool of Latina artists is very slim and these five Latinas are really making a name for themselves in their various genres. These artists include both English and Spanish – in which each one of them really distinguishes themselves from the rest. The various genres of each one is really a testament of how the music scene is changing and the future of Latina artists is skyrocketing in the right direction. Lets check out the top 5 Latinas to look out for in 2015!

Raquel Sofía: She has toured with Shakira and Prince Royce as a back up singer and has opened up for Juanes and Cristian Castro. With credentials of performing/writing for worldwide sensations like Shakira, Juanes, and Prince Royce, Raquel Sofia already has made a name for herself without putting out an album. Born and raised in Puerto Rico, Raquel Sofia is bilingual and sings in English, Spanish and Portuguese. When I first heard Raquel’s music I really wish I spoke Spanish because her amazing voice is so soothing and the lyrics seem magical.

Kat Dahlia: The spirited 22-year-old was raised by Cuban-born parents in Miami Beach. Though fluent in English and Spanish, her French surname, Huguet, is owed to her paternal great-grandparents who came to Cuba from Lebanon. Kat’s parents emigrated to the U.S. as children and their island culture carried over into the language and salsa music that was fundamental to her upbringing, as Celia Cruz, Tito Puente and Willies wafted through the air in her abuela’s kitchen. When I first heard Kat a few years back I knew she was something special and her sound is so unique in to what’s out there right now. My choice song: “I Think I’m In Love.” Recently released album: My Garden Video: https://www.youtube.com/watch?v=VG_jUMq37cI Link: http://katdahlia.tumblr.com

Melanie Martinez: Melanie Martinez is from Baldwin, New York and is of Puerto Rican and Dominican heritage in which she is bringing a unique style to the music scene. The Voice alum, who was on Team Adam Levine during the show’s third season, released her first EP Dollhouse late last year and is proving to be an online phenomenon with over 15 million views on the music video for her single, “Dollhouse.” Her distinctive musical sound has even drawn the attention of American Horror Story: Freak Show, which used her song “Carousel,” in the trailer for their new season. I actually was fortunate to see Melanie on tour back in November and I have to say she puts on a great show with her unique style that she includes on all her songs. My choice song: “Dollhouse.” Recently released album: Dollhouse EP Video: https://www.youtube.com/watch?v=HcVv9R1ZR84 Link: http://melaniemartinezmusic.com

Francisca Valenzuela: She’s a Chilean-American singer, songwriter, poet, musician and entrepreneur. She’s been called “Latin America’s most glamorous artist” (Esquire Magazine, Spain), “One of the newest hit-makers” (New York Times) and it has been said her music is “an elegant pop that seduces you and then shows its teeth” (La Razón, Spain). When I first heard Francisca’s music I once again wish I understood Spanish because I loved her unique sound that really made me compare her to La Roux in which she has this electro-pop sound that is very contagious. My choice song: “Armadura.” Recently released album: Tajo Abierto Video: https://www.youtube.com/watch?v=ojW4NZNp_SU Link: http://www.franciscavalenzuela.com/en/

Selena Garcia: As a child, Garcia split her time between Northern California and Washington State, spending summers with her mother in Alaska. It was during those summers that she first began to experiment with writing songs. Garcia has been referred to as “A sister to Fiona Apple.” Her smoky voice hails comparisons to the likes of Amy Winehouse, Adele, and Sade. Her lyrics have been described as “fresh and real” and emulate the spirit of her storytelling idols like Nina Simone and Etta James. One part jazz, one part soul, with hints of blues and rock, Garcia possesses an eclectic style that places her months ahead of the monotonous trends of radio. When I first Selena’s music I was mesmerized by how amazing her voice is and it really made me compare her to a Ingrid Michaelson or someone a long those lines because of her simple yet powerful voice. My song of choice: “Eternal Sunshine.” Recently released album: Selena Garcia Video: https://www.youtube.com/watch?v=Yhc3qjF3Me8 Link: http://full.selenagarcia.com

Well, I really stepped outside my comfort zone this month and I really hope you fall in love with each one of these Latina artists like I have over the past few weeks. Also, you saw it here first if you see any one of these artists hit it big in 2015! I wouldn’t be surprised 😉

Related: Songs to Lure Love into Your Life

Who are some of your favorite up-and-coming Latina singers? Please share!

2 thoughts on “5 Latina Singers on the Rise”