Skip to content
Home » How one gritty softball season crafted me into a power chica!

How one gritty softball season crafted me into a power chica! 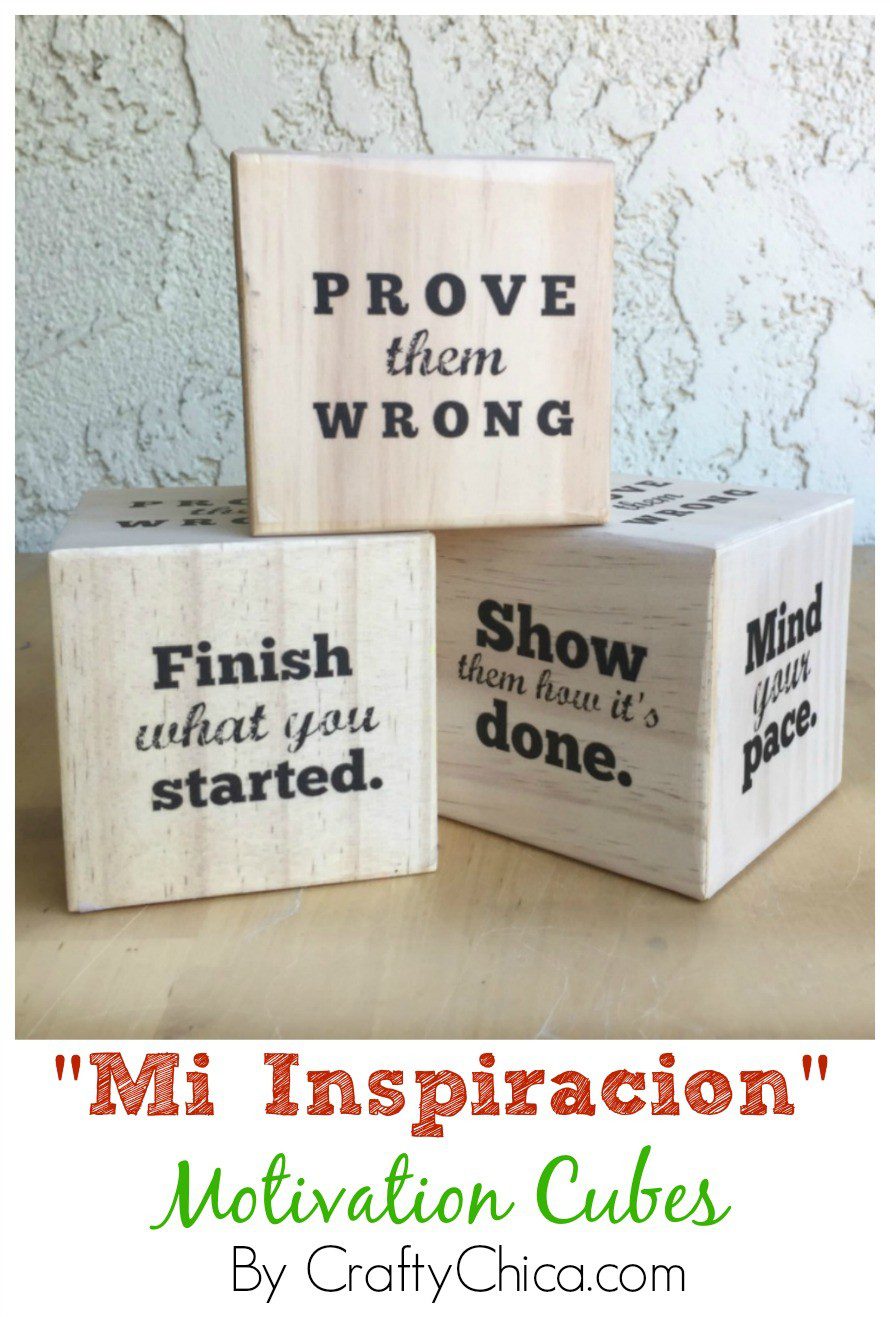 This post about my tragic softball story is inspired by the movie McFarland USA.

I loved the movie! I even put it on my Happy List in March! And I have a personal story to share that fits with the spirit of the film! I was reluctant at first because I normally don’t like sports films, but I’d heard so many good things and I had time to kill, so I went and watched it by myself when it came out in theatres. WOW – very inspiring because it hit close to home! 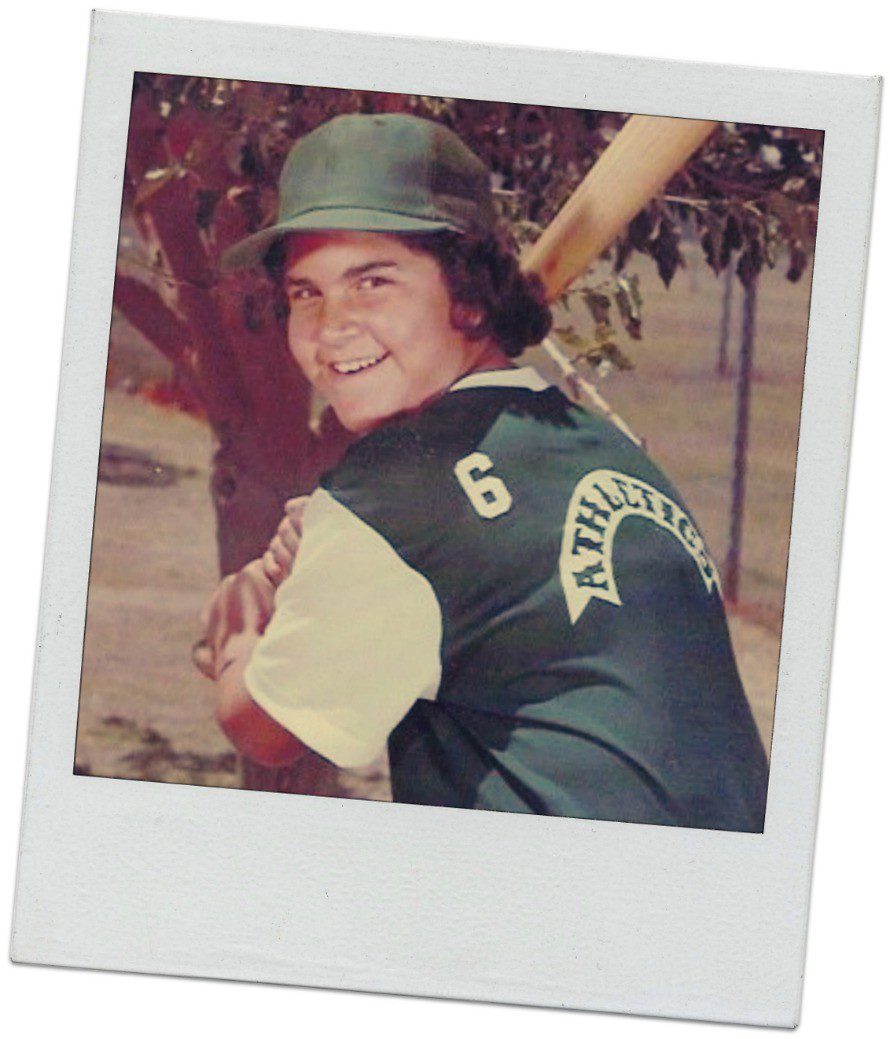 Back in grade school, I was a member of a summer softball team. I played every year, and every team I was on came in last place, I kinda felt like a jinx. We made the Bad News Bears look like the Arizona Diamondbacks when they won the championship. Ugh. Our team lost every game.

One year we had a head coach come on board who didn’t know how to tighten the screws, he just let us practice when we wanted, and did his best to get us rounded up in time for the first inning. He didn’t have much enthusiasm, he seemed to just go through the motions for his daughter, our pitcher. Fatherly duty, complete! And for two more years, our team sucked. Last place again and again.

Coach Debbie came along. She played for the Sun City Saints, an all-female softball team in Arizona. She signed up as our assistant coach and from the first moment I noticed her athletic swagger, I knew my chubby legs would be put to the test. Coach Debbie demonstrated all the moves she would teach us. I swear, a flame of fuego flickered behind each ball she pitched, and the phrase “I guess so” did not exist in her vocabulary, much less “I’m tired.” Sure enough, she snapped her fingers in the air and yelled for us to run multiple laps around Cortez Park until we threw up. She worked each of us to the points of tears. She didn’t give us a break until we completed every round of her exercise routine. That was only the first week.

The official games hadn’t even started and my teammates were already threatening to quit. I felt coach Debbie worked me the hardest because I was the chubby one. The slowest one, the most clumsy, the only brown girl on the roster. One day I was horrified to learn that Coach Debbie had a plan for me to bat both left AND right-handed. I went home and cried to my parents, my legs felt like Jell-O! I knew she loved to torment and pick on me more than the other girls. So unfair! This was NOT the softball experience I had been used to. I didn’t want to break that kind of sweat or be scolded to run faster. “Pick up those knees, Cano! “Push it, push it, push it!” she shouted. The nerve of her!

I remember my dad reading the newspaper while I chucked my glove on the floor and made my case.

“Because she makes you run laps and work hard to be a better ball player?” he replied calmly.

“Yah!” I cried out. “I don’t care about being a better ball player, I just want to have fun!”

“Wait until the first game, then we’ll talk,” he said. Case closed.

ARGHHH! I hated when my dad did that. I knew there was some kind of lesson to be revealed down the way, but I didn’t want it. I wanted to coast on a giant floatie in my cousin’s pool.

Coach Debbie kept on with no mercy and even inserted extra practices. A couple girls quit, but the rest of us – well, our parents made us stick with it. I noticed we weren’t the only ones cursing under our breath. Our head coach seemed to be annoyed with Coach Debbie too. As she took control of the practices, we automatically looked to her for approval. Coach Debbie became the Alpha. Sometimes we’d be on point with our practice, making progress with the base drills, happy to finally be in sync, when out of the blue, our head coach would signal us to stop so he could give us a new drill that made no sense. Coach Debbie would correct him, she was a professional softball player after all, but he wouldn’t have it.

The first game came around and something odd happened. After busting our butts for weeks in preparation, a look of hunger came over our faces. We wanted to eat the other team for lunch! The formerly lame Athletics became lady bosses – real athletes.

All that work paid off because – WE WON OUR FIRST GAME! I recalled my dad’s words, “Wait until the first game.” It’s like he knew our team would rock!

I can’t even relay the elation and disbelief when the last inning ended. silence fell over the ball field as we gasped in astonishment, then tackled Coach Debbie. She met our eyes and hugged each of us and told us how proud she was of us. Our team turned a new leaf that night. We were seriously sobbing from pride. And we owed it all to Coach Debbie!

A few days later, we all showed up for our next practice, ready to get serious. But we didn’t see Coach Debbie. Anywhere. Our head coach hemmed and hawed and told us that she came earlier, wasn’t feeling well and had to leave. “Weird,” we thought, that didn’t seem like her at all. We did our best to practice anyway, but it just wasn’t the same without her. Our head coach tried to pick up where she left off, but the fire – the ganas – just wasn’t there. No passion.

A few days later, our next game! I had been practicing batting both left and right handed with my dad at the park. Coach Debbie was right again. When I batted left-handed, I hit strong line drives; right-handed, the ball soared high across the field. She saw that in me when I couldn’t. She knew that I could use my weight to power the ball where I wanted. I couldn’t wait to show her how I’d mastered this technique!

“Coach Debbie quit,”  said our head coach, looking pretty darned guilty. “She doesn’t have time for us anymore, that’s all.”

The game hadn’t even started and we were already dejected, ready to put our fingers in the L position and hold them up to our foreheads. Now we all really wanted to quit. Even our parents were angry and questioned the head coach about what happened. While all that was going on, we heard Coach Debbie call to us from the residential alley behind the fields. She stood on one side of the fence and signaled us over.  We ran to her, sobbing, begging her to come back. We missed her. We needed her.

She told us that we needed to respect our head coach and that she had to leave to focus on her own position in the Sun City Saints. She said that since she had been coaching us, her coach had been riding her. We knew she was lying just to be kind to our head coach. Later we all learned he had his differences with her over the coaching hierarchy or whatever and she walked.

We lost the next three games. We gave them our best, but we couldn’t recapture that magic we had. It’s the worst feeling ever to work very hard for something – get it – and then lose it. Or give it up. As kids, we didn’t know better. Now we hated our head coach, he became the bad guy. We just wanted the season to be over with. I told my parents I didn’t want to play summer softball again, and they agreed as long as I finished out the season.

OK, then guess what happened? About mid-season, we all went to the park for our usual practice, and our head coach made us sit on the grass to talk. You’ll never believe who struts up? Coach Debbie! She smiled brightly and explained that she cleared things up on the Sun City Saints and had time again for us! We all knew that our head coach had lured her back with apologies and promises. We didn’t care, we were just soooo happy she came back. Our head coach stepped up and told us that she was now the HBIC and we were to follow every order. We jumped up and hugged her, then she blew that whistle of her and started the terrifying drills again.

“I hear you lazy bums have been losing?” She shouted. “Get on your feet! Knees up!”

That turned out to be my favorite softball season. Our head coach even took our entire team to go see Coach Debbie play in her own series. She didn’t return to Cactus Wren softball the next year, I think we emotionally drained her! I don’t even remember if we won other games that season, I’m sure we did. All I remember is that was the summer that I turned from a shy, soft chubby girl into a power chica! Harnessing my strength and power and putting it to good use – batting both right-handed AND left-handed!

That Coach Debbie experience was the first time I ever experienced tough love. I remember telling coach Debbie I thought she hated me because she picked on me so much. You know what she said to that?”

“I picked on you, Cano because you were lazy!” she said bluntly. “I wanted to wipe that cute little smile off your face and make you earn the feeling of what it is like to win.”

I NEVER forgot those words, and honestly, I think it helped me to not take the easy way out in situations throughout my life.

That’s why McFarland USA meant so much to me. Especially the (chubby) boy who became the “anchor” of the team, I could sooo relate. It’s a movie about being the underestimated underdog, taking the hits and pushing yourself anyway. That is the only way to get to the finish line.

For this project, I used quotes from the movie, as well as quotes from Coach Debbie – they are pretty much in the same spirit! I call these Motivation Cubes to remind you to kick butt in all you do, give everything your all. Just like the kids in the movie did!

Here are the wood cubes ready to go! 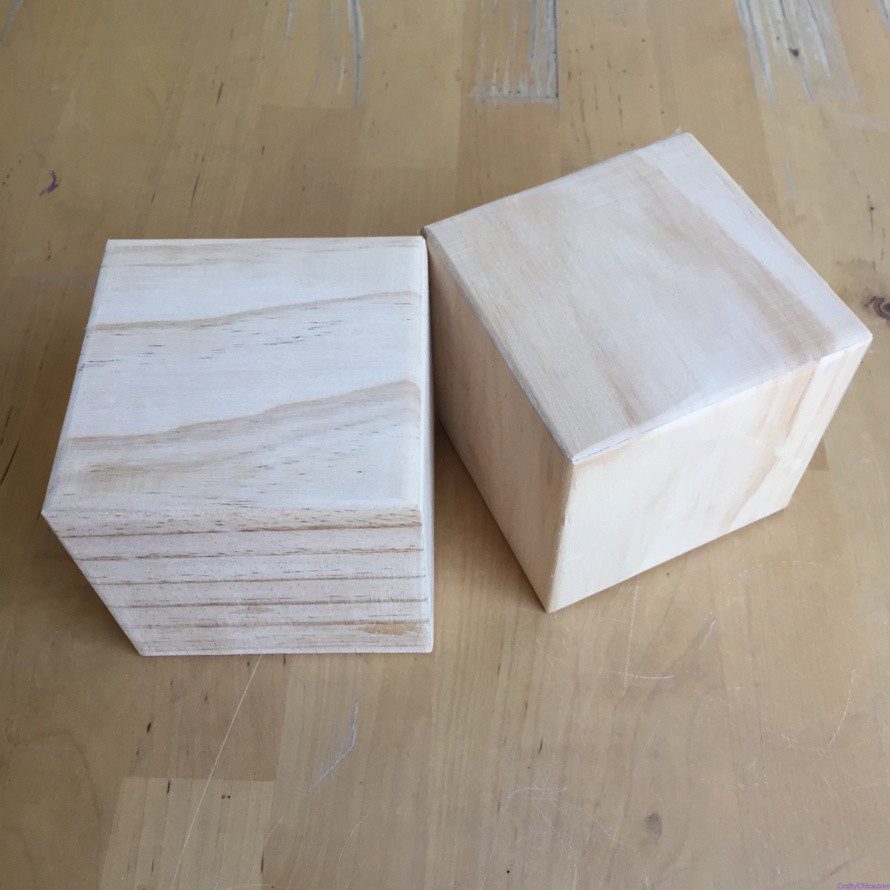 Print out your design, you can use mine (I have the jpg at the end of this post) or make your own. I used a graphic program, then flipped the image to make thembackwards and printed them out on the decal paper (found at the craft store or online). 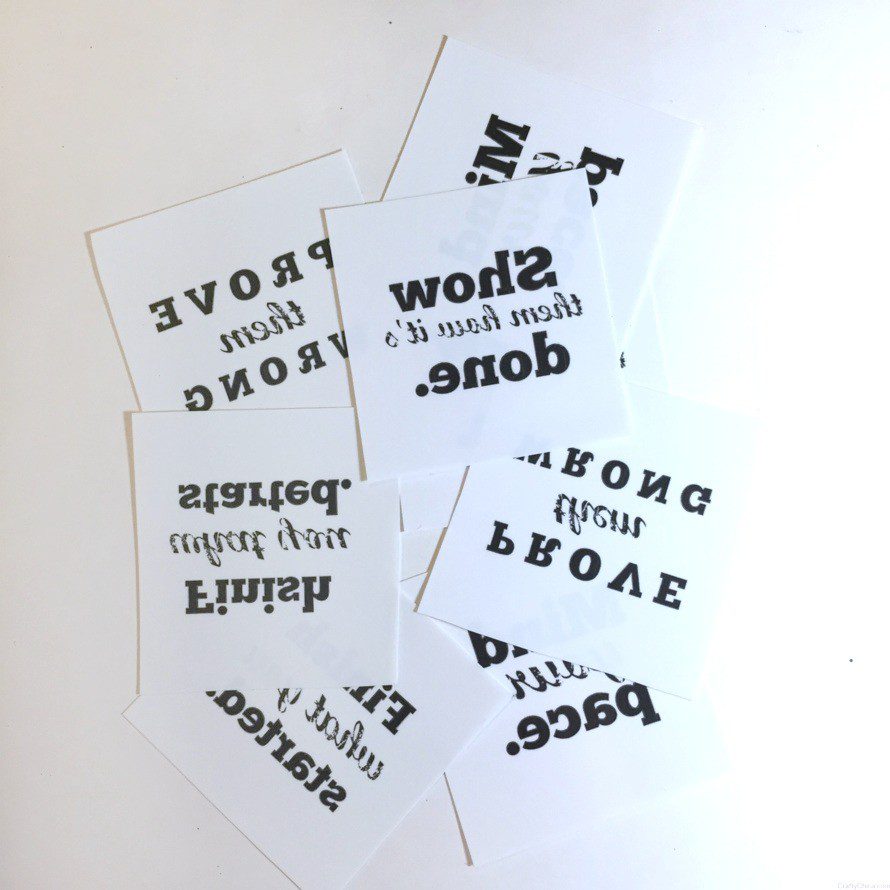 Apply spray adhesive directly to the image and press onto the wood block. Smooth out any wrinkle with your fingers. 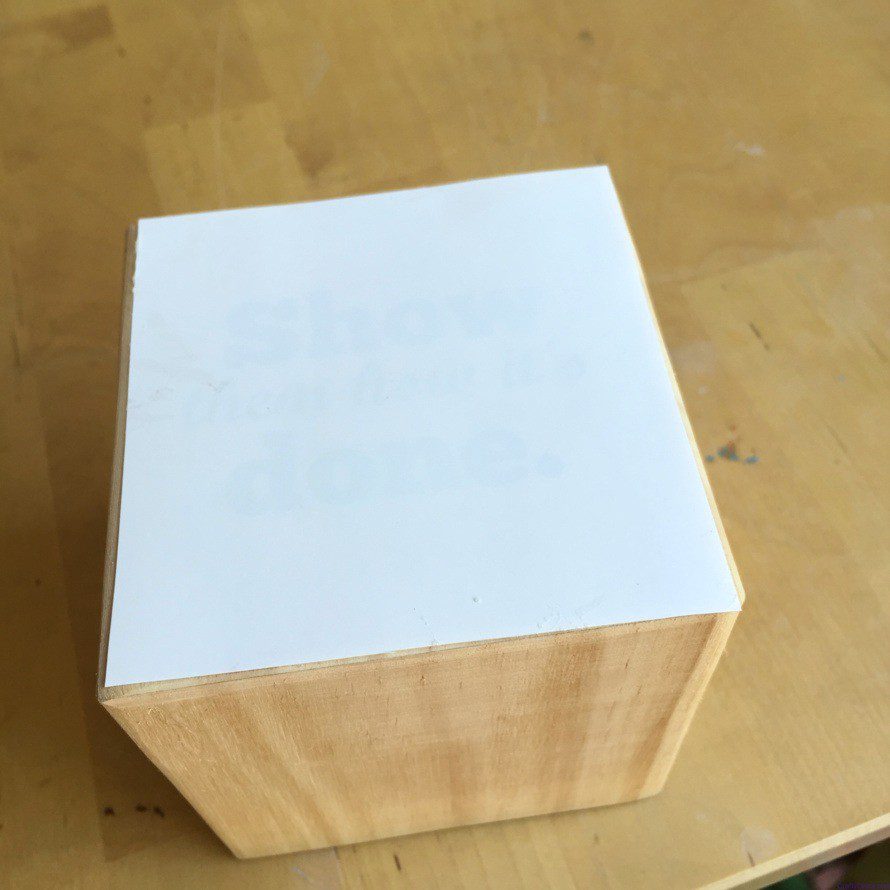 Wait a few minutes, then peel away the protective backing. 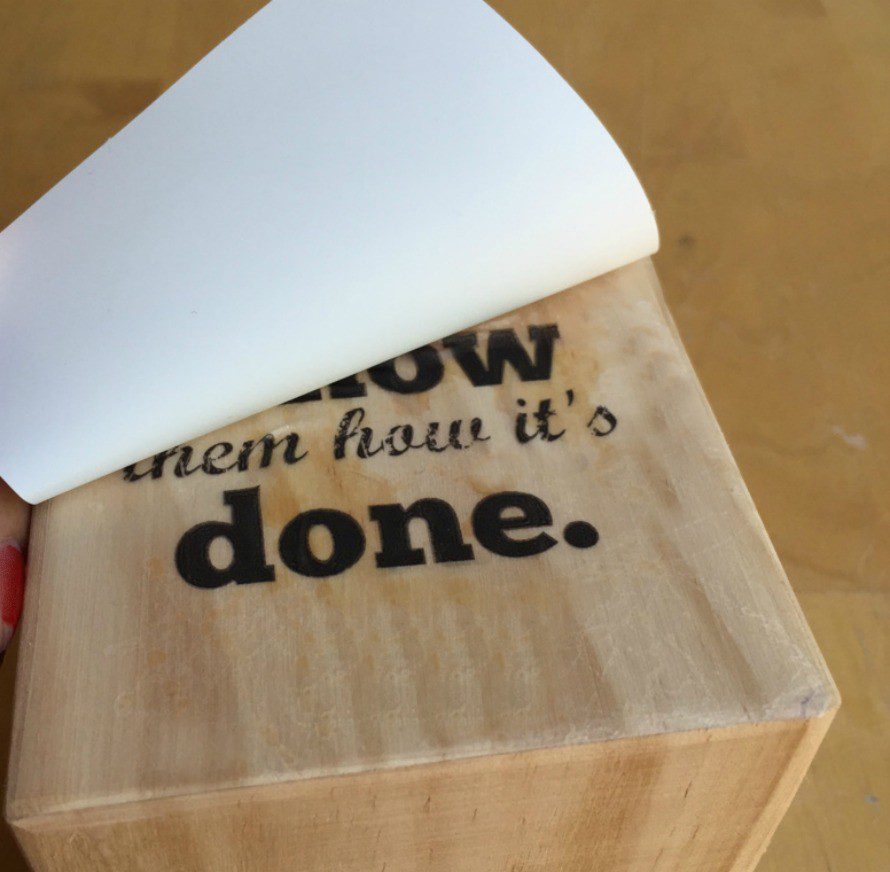 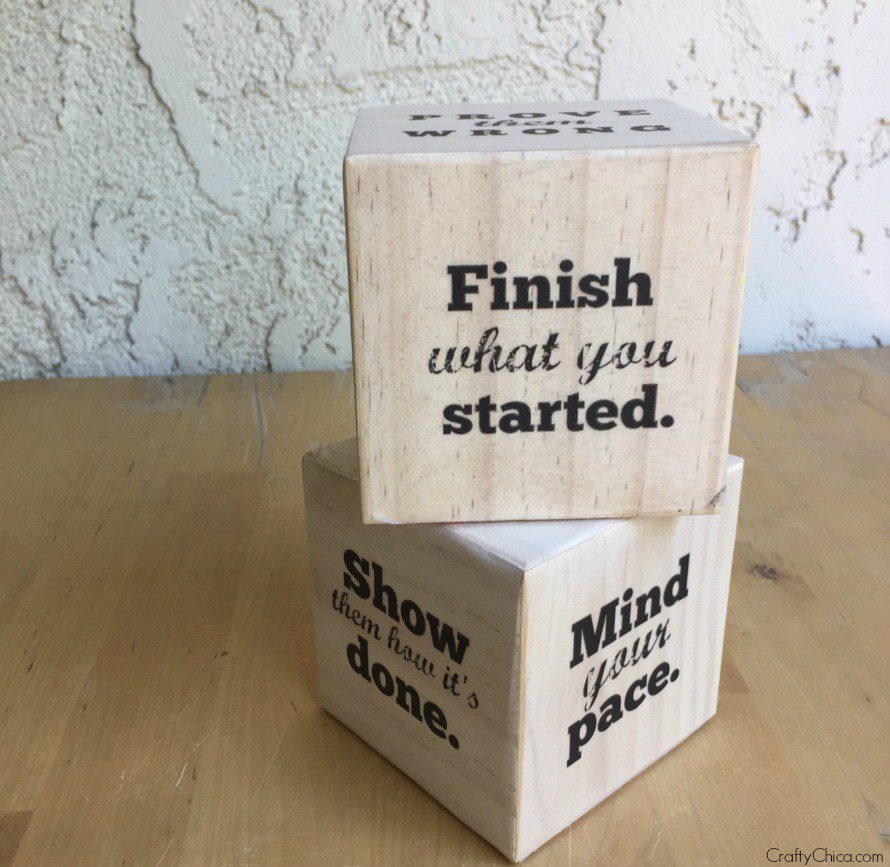 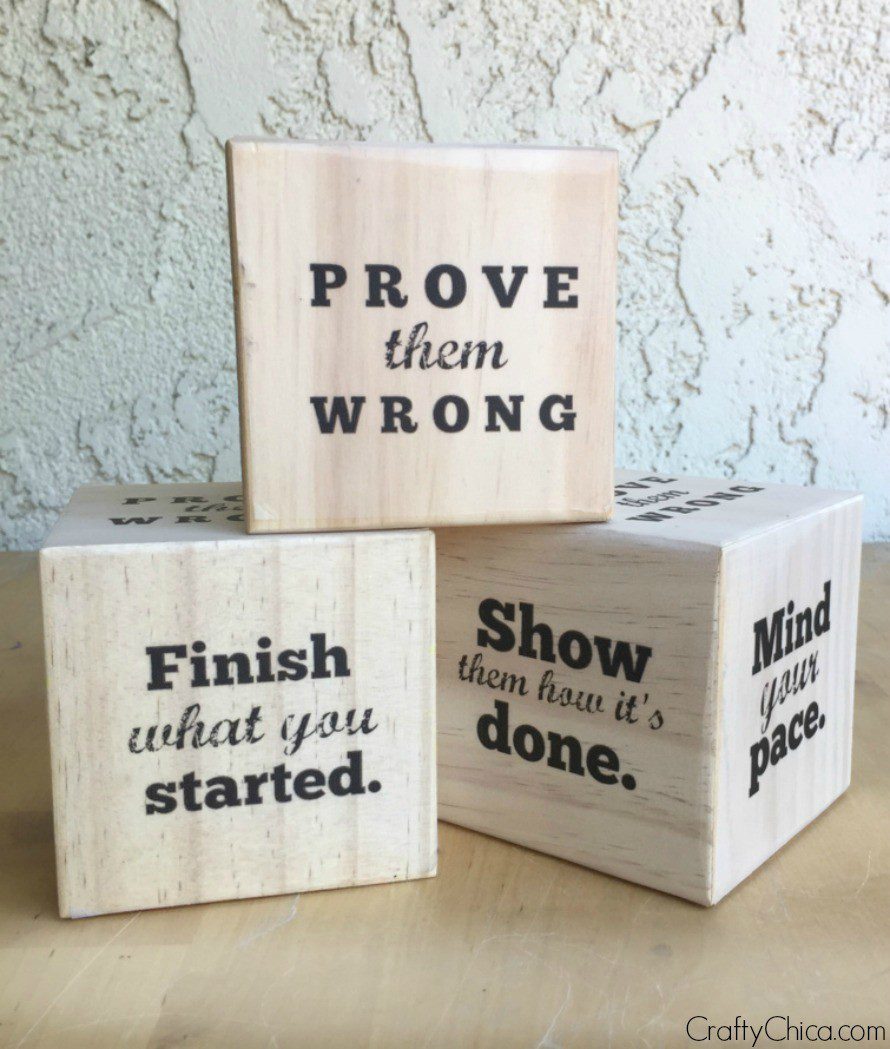 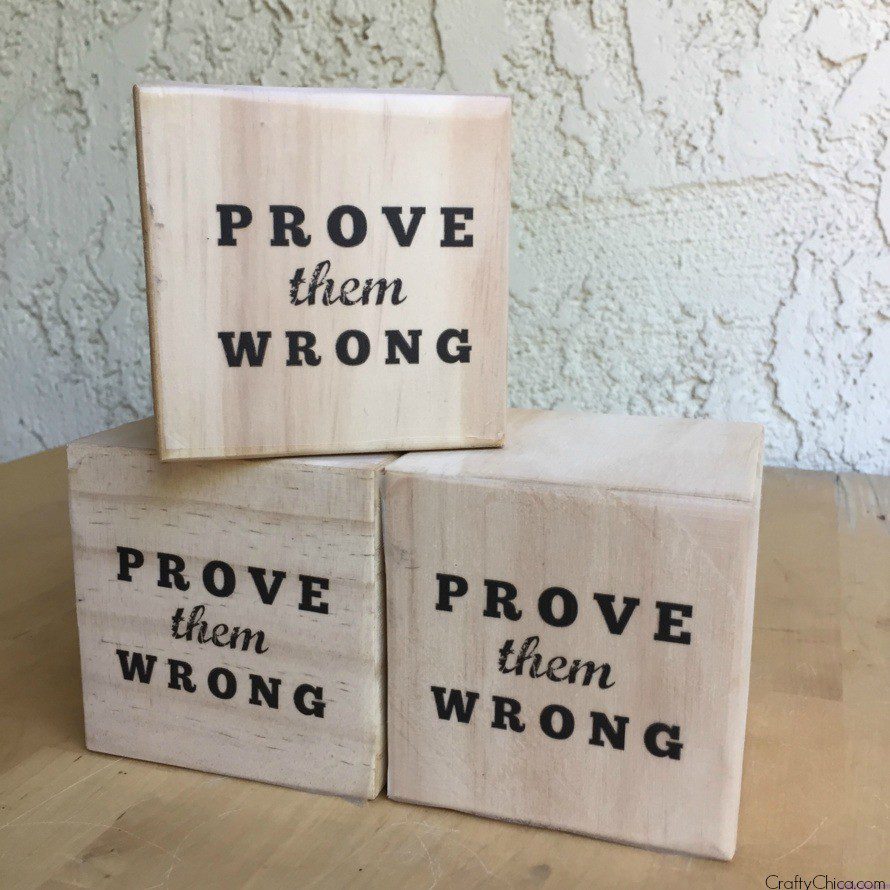 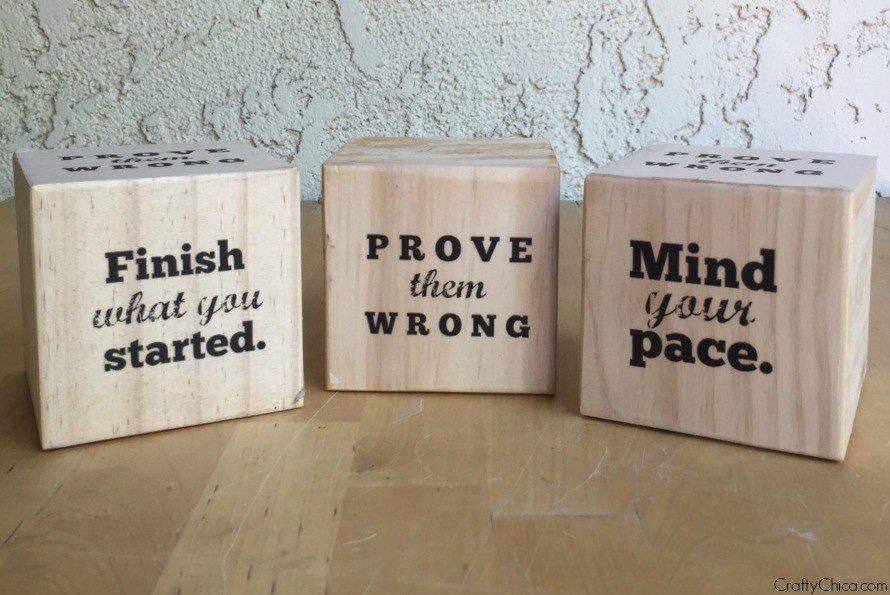 And here is a Vine I made too! 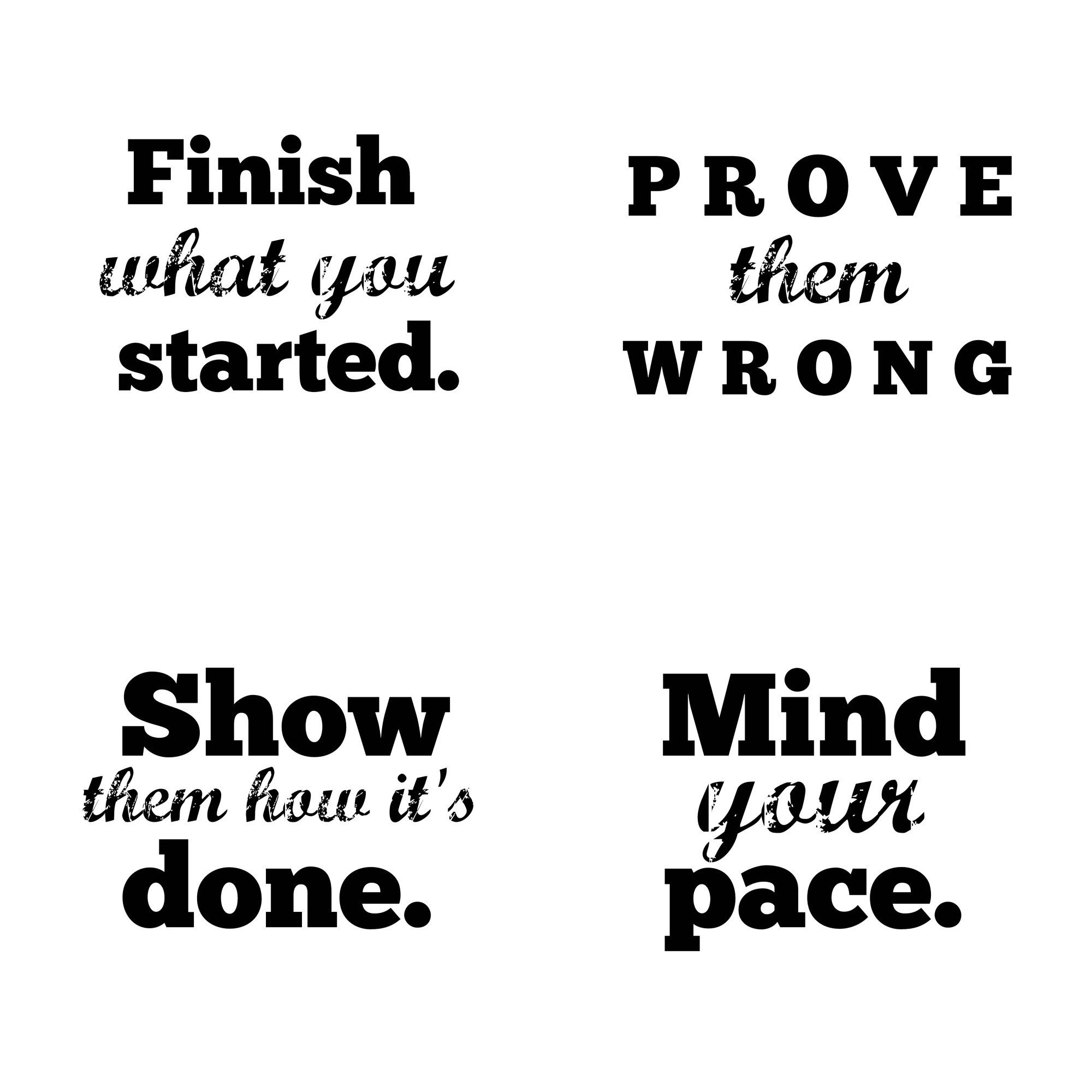 Helpful photo tips to use everyday

9 thoughts on “How one gritty softball season crafted me into a power chica!”

Types of varnish for acrylic paint – my faves!