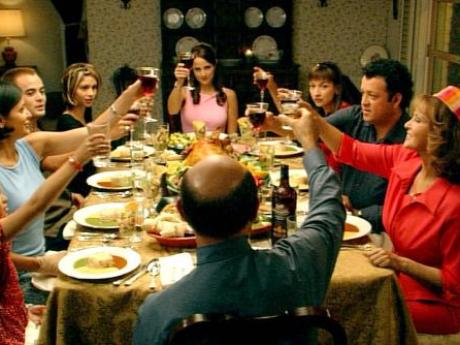 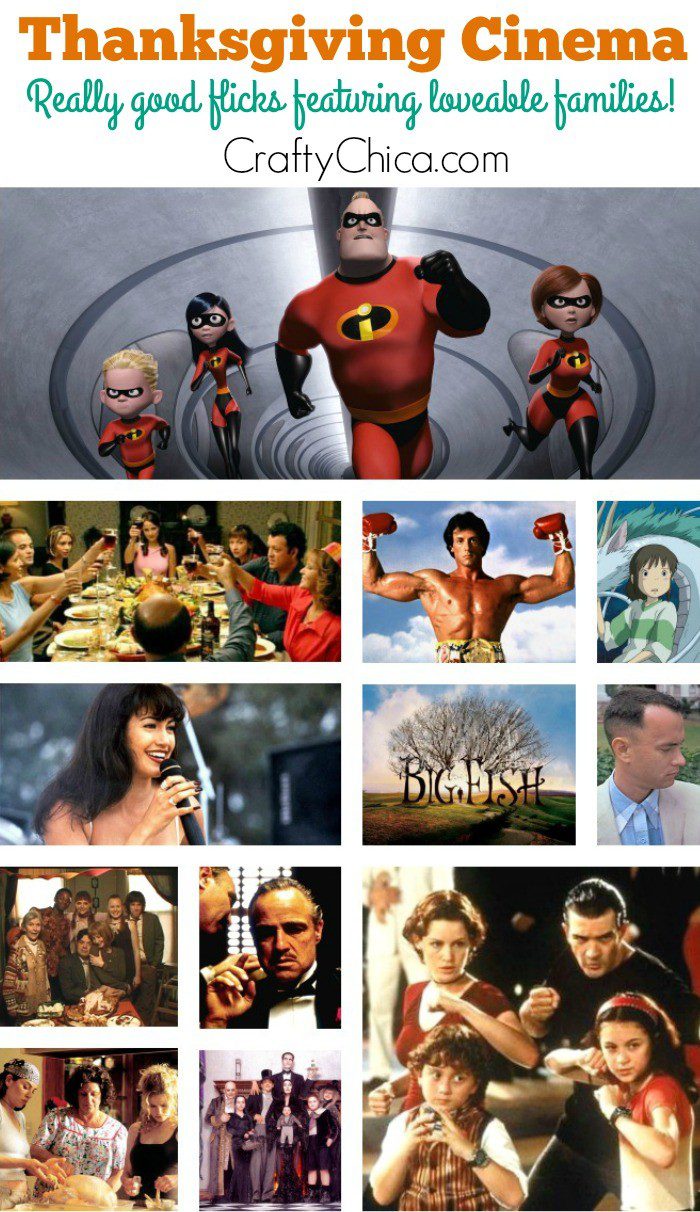 Thanksgiving is focused on family. But we all know every family, no how perfect it may seem, has flaws and weaknesses. But it’s how those are handled that determines what kind of memories will be made. Perfect is boring! Let’s all be real here and celebrate our hits and misses while soaking up lessons learned from loveable families in movies. They made it work one way or another, and we will too. Choose any flick from this movie compilation to use as good, old-fashioned familia bonding time on Thanksgiving day, or any time!

Whether it is your mother, father, sister, brother or anyone else who loves and adores you or a person in your life that has been by your side through thick and thin, family means the world to many of us. In these films we see the main characters face a number of conflicts, often far too daunting to face alone and finds strength in those closest to them.

Without further ado, here are our favorite loveable families from the big screen! By the way, this was a mother-son collaboration!

(DeAngelos’ pick) We all know and we all love Rocky, so it was an easy pick for this list. For any out there who might be unfamiliar with one of the best films in cinema history, we’ll fill you in! Rocky focuses on a lackluster boxer/thug named Rocky Balboa. He finds himself thrown into a boxing match against heavy weight champion, Apollo Creed. Despite his lack of support, he trains with every fiber of his being for the fight of his life, finding out who truly loves him when the going gets tough. View the trailer here!

(Kathy’s pick) You may have not heard of this one, so here is your chance. It’s about four families, each from a different cultural backgrounds, with varying ages of kids, viewpoints, traditions, situations and the drama that unfolds on Thanksgiving Day. Everyone comes together one way or another to laugh, gasp and even shed a tear or two. View the trailer here.

(DeAngelo & Kathy) Pieces of April is about a young woman living in New York who invites her family over for Thanksgiving. Only problem is that her family lives in a whole other state and she has never quite gotten along with them, also I should mention she is a horrid cook. April’s family is incredibly skeptical about the entire affair while April’s neighbors all pull together to support her in her time of need. It’s a wonderful film that many of us can relate to on various levels. View the trailer here!

(DeAngelo’s pick) This had to be one of my all time personal favorite films dues to having such a ridiculous family be the center of the story and made to feel like the most normal of characters while the ‘every day’ folks seemed like the crazy ones. Anyone who comes from a dysfunctional family that is filled of quirks will love this film for taking all of their faults and turning them into charms, just as all of us should do with our own families! Take pride in what makes your family unique! View the trailer here!

(Kathy’s pick) “We have to be more Mexican than the  Mexicans and more American than the Americans, both at the same time! It’s exhausting! Nobody knows how tough it is being a Mexican-American!” Remember the comical wisdom of Selena’s dad, Abraham? It’s time to revisit it by queuing up this fan favorite. The music, the story, the familia loca, all of it will put a smile on everyone’s face. Bidi Bidi Bom Bom! View the trailer here.

(DeAngelo & Kathy) We’ve all grown up with family members or folks in our lives who tell the tallest of tales. As children we may believe them to be fantastic and real then as we grow older we might learn the truth behind such tales. In Big Fish the main character is fed up with his father’s tales and demands the truth. We, the viewer, are then presented with those same stories his father told for so many years and come to learn that often times embellishments are what make the stories so memorable, which makes us love those who told them so much more.  View the trailer here!

(DeAngelo’s pick) If you enjoy anime an incredible film is Spirited Away by Hayao Miyazaki who is the Walt Disney of Japan. The film tells the tale of a young girl who is frustrated with all the changes in her life and ends up in a world so very different from her own. She then fights with every fiber of her being to reclaim all the things she took for granted. It teaches an incredible lesson of appreciation, friendship, and family. View the trailer here!

(Kathy’s pick) This movie will melt your heart faster than cheese on a enchilada. One father who is a master chef worries about the longevity of his career while also juggling concerns with his three daughters. Kudos to all the juicy food shots in this film, they are just as tasty as the characters’ plotlines! View the trailer here.

(DeAngelo’s pick) Another animated film that is wonderful is none other than The Incredibles. In a world of superheroes, two of the world’s greatest champions decide to marry and settle down. The husband hits his midlife crisis years later when their kids are in high school and toy with the idea of secretly fighting crime once again. As he continues to take on various jobs he soon finds himself in a situation he can not easily get out from and discovers the power of family can overcome any obstacle. View the trailer here!

(DeAngelo’s pick) Another classic film on this list that teaches us about the incredible power of family is Forest Gump. Young Forest Gump was born mentally slower than his peers and also physically limited. With the help of his mother and friends Forest Gump overcomes all conflicts while remaining true to himself and always giving whatever he could to others even if they could not repay him. In return for his kindness over the years, he makes new friends who become his family through and through. View the trailer here!

(DeAngelo’s pick) In Godfather family means everything to these characters as the family business deals in mobster activities. It’s a world where the only people you can trust are those who you are related to since every one is looking for a way to rise up the ranks in their organization, no matter the price. At first the youngest son of the Godfather comes home and is disgusted by the family business but when push comes to shove, he must do whatever he has to to protect his family. View the trailer here!

(DeAngelo & Kathy’s pick) Despite this being a children’s film, it contains various mature messages that will hit home for all ages. When two international spies fall in love and have kids, they tend to get a bit restless as they think back to fond memories of being out on the field and saving the world. When they get themselves into trouble, it’s up to their two kids to get a crash course in being a spy and must charge into danger to save the ones they love. Only one thing, the brother and sister duo cannot stand one another. View the film here!

(Kathy’s pick) When a comfy chef’s career is upended on social media, he has to clear the counter and start from scratch. Tugging at his sleeve is his precocious son who wants nothing else but to be a part of his busy dad’s life. The two set off on an unforgettable road trip from Miami to LA. The food scenes are so delish in this film, it may just make you want to ditch the turkey in place of a Cuban sandwich. And not to mention la musica. It should also be noted that Sofia Vagara turns in her most subdued, but touching performance yet.   View the trailer here.

Well, there you have it! My mom and my choices for your Thanksgiving cinema featuring loveable families! Whether they are related to you by blood or by bond, we all have those special people in our lives that make the toughest of days that much easier to get through. Sometimes in our busy lives we forget just how incredible these individuals are and need to be reminded by wonderful movies to motivate us to pick up the phone and call them.

We had a hard time narrowing down this list, we know we left out a lot! What films do you love to watch when you want to get warm and fuzzy about family?

DeAngelo Murillo is a writer, geek-enthusiast and founder of TheGeekLyfe.com. See more of him HERE. Follow him on Facebook,Twitter, and YouTube!