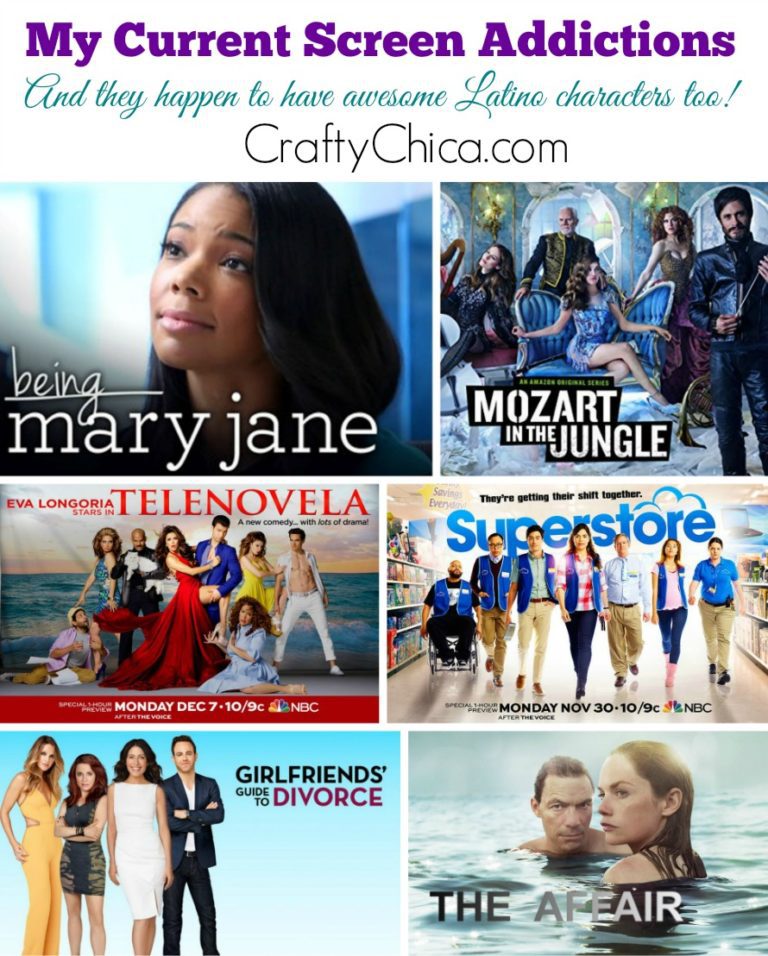 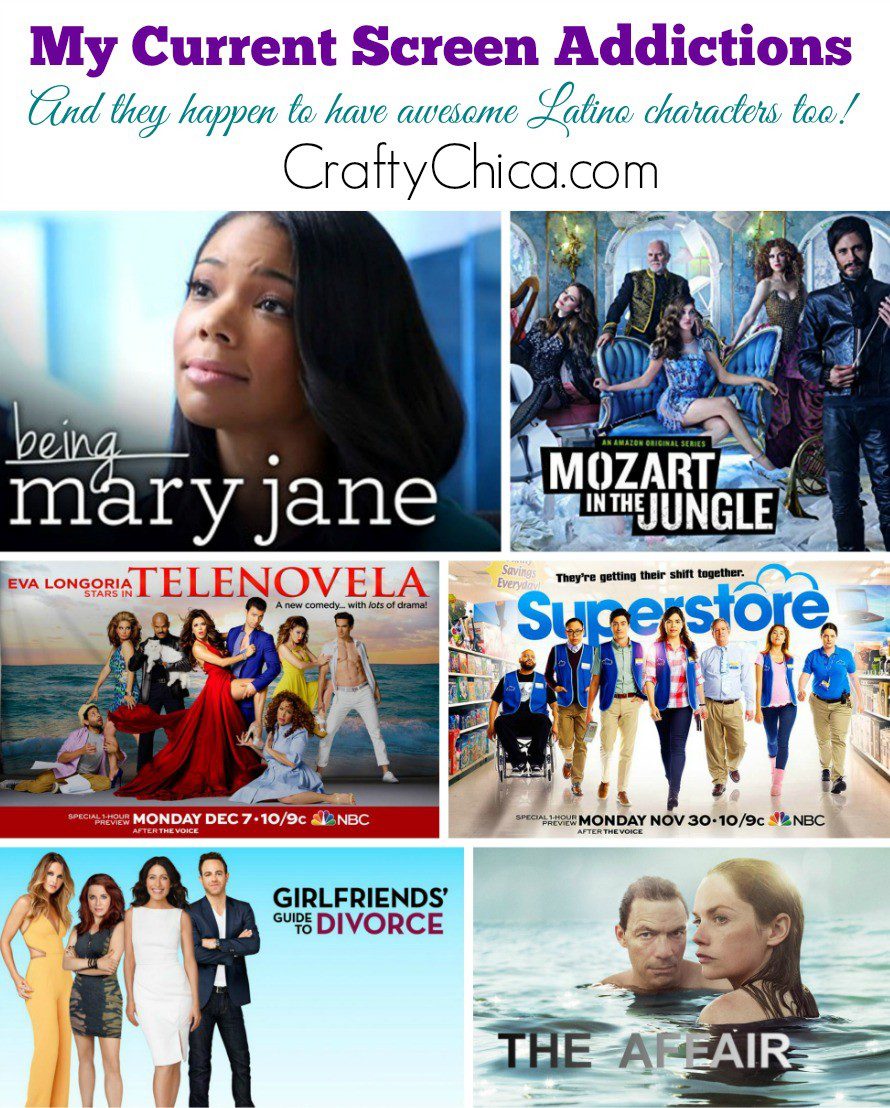 I just wrapped up a very busy art season, I’m talking twelve-hours a day in the studio. I watched a LOT of shows while working – and I discovered some awesome Latino TV characters! First and foremost, I’m recommending these shows because they are entertaining and thought-provoking. Regardless of the ethnicities of the cast. That’s when you know a series rocks, when the topics are universally relatable. They hooked me, then along the way, I noticed the diversity in the actors and appreciated this line up even more. They aren’t aye-aye-aye characters with the same lame jokes. These are refreshing roles that slip right in with the rest of the storylines!

I’m not into dating shows, crime series, thrillers – I love good old fashioned human drama. So here are these shows I binged watched this season, and looking forward to more episodes!

The Girlfriends Guide to Divorce (Bravo, Netflix): I watched because I love stories involving lives of a group of friends. The main character is Abby, a parenting author who seemingly has a perfect life, until her husband cheats and leaves her. She has a major meltdown at a big book signing and her career crashes. And that is just the very first episode. The rest of the series (two seasons so far) is about how she not only navigates the divorce, parenting, dating and salvaging her once lucrative career, but also stays true to her own convictions. Along the way we meet her also-single friends: Phoebe, a rich boho socialite seeking purpose; Delia, a high-powered divorce attorney who falls for a client; and Jo (Alanna Ubach, the actress is half-Mexican, half-Puerto Rican, as is her character is the latter), a recently divorced mom who decides to launch her own vegan dessert shop. Overall, it’s funny, insightful, emotional and sexy. Video of trailer.

Being Mary Jane (BET, Netflix): I’m a longtime fan of Gabrielle Union. I’ve interviewed her three times for past projects, and she is an extremely down-to-Earth chica, super sharp and proud of her craft. I will watch ANYTHING she is in, because I trust her choices. And this one is a winner. This series really hits home for those of us who are juggling a mega career, plus the drama of family life. In Mary Jane’s case, she is a national TV show anchor who constantly takes professional and personal risks. She is living the high life of affluence and glamor, but once the cameras are off, she deals with tons of self-doubt, a broken heart, and a family who that feeds her anxiety. Mary Jane’s boss is Kara, played by Puerto Rican-American actress Lisa Vidal. Her character is success and career driven, which led to a divorce after 15 years of marriage, and challenges her traditional Latina upbringing and even creates riffs in her family. On the show, we see her fight to celebrate she talent as an award-winning producer, yet still be there to pick up the kids from soccer practice. I’m telling you, every episode has me feeling all kinds of ways!!! Not to mention, the music is bomb. Here is the video trailer.

The Affair (Showtime, Hulu): I seriously didn’t think I’d get into a show about an extramarital affair. How long could that last? Well, turns out, two seasons so far. And I can’t wait for the third. This series is about a seemingly happy family who spends a summer on an island as a well-intentioned getaway. It’s everything but. I watched because the main character, Noah Solloway, is a mediocre one-time author and college professor struggling with writer’s block to get his next book finished. He hasn’t written a word in months. On the island he comes across waitress Alison Bailey, a former nurse dealing hungry to find an escape from grief. Thier angst connects like chunky magnets and the story is set into motion. Each episode is divided in half, showing the same events from each of their perspectives. In the second season, it’s divided into four, and includes the soon-to-be ex-spouses POVs. And not only is there a murder mystery involved, but the second season drills down into the aftermath of their actions on both sides of the extended families. It’s one big hot mess of slow burning gripping drama. If that even makes sense…In Season 2, Catalina Sandino Moreno, brings a ray of light into one of the lives of the family. In the role of Luisa, a caretaker-turned-entrepreneur, she has a strong, quiet strength despite her own tragedies. Oh, and it also scores two other brownies points for me – 1. It stars Joshua Jackson (Pacey from Dawson’s Creek!) and has a haunting original song by Fiona Apple. That alone will make you want to watch every episode! Video trailer here.

Mozart in the Jungle (Amazon Prime): Currently in its second season, I’m only three episodes in on Season One, and I have to say, it’s…kinda odd in a captivating way. BUT, it stars Gael García Bernal as a crazy, ego-obsessed, classical music conductor at the fictional New York Symphony. And oh, how he embraces his role. He gives it – and us- life! How can we NOT give it a try? Right? Based on the memoir, Mozart in the Jungle: Sex, Drugs, and Classical Music, by Blair Tindall, it shows the gritty, not-so-classy side of orchestra life. It’s very lavish, over-the-top, a little campy and I’m liking it. A lot! Stay tuned, I’ll let you know what I think! Video trailer here.

Telenovela (NBC): I was leary at first of this Eva Longoria project. A show about a Mexican novela, really? We already have Jane the Virgin, which strikes that same tone in a great way. Is Eva trying to copy? Turns out – no. This one is legit. It’s a wonderful comedy companion to Jane! If 30 Rock and Ugly Betty had a baby, it might be something like this. There were a lot of moments where I actually burst out laughing, I never knew Eva could be so funny. She plays the lead in a Mexican novela, but she can’t speak Spanish and watching her fidget, you can’t help but feel endeared to her. And working in the fast-paced superficial la-la land, she has that constant worry to keep up her game. Add in some really goofy, lovable side characters, storylines that focus on friendship and lessons learned the hard way (a sitcom must-have!) and you have a winner. I really hope this show goes on for more seasons. Check out the trailer, you know I got a kick out of the end of it, with the dress!

Superstore (NBC): I’m gonna be honest and admit this is my least-favorite of the group, but I love America Ferrera and am sticking with it for now. Brought to us by The Office producer, Justin Spritzer, it’s a workplace comedy that takes place at Cloud 9 (think Walmart). I do  like it a lot, it’s just a quiet type of entertainment. For example, with all the other shows I listed, there were many moments when I put down my paintbrush to focus on what was happening. With Superstore, I just kept working on my project at hand. It’s only a few episodes in, so I’m holding on to see if it grows on me. It has a deadpan type of comedy with a lot of quirk, so I have hope! Here is the video trailer link.

Well, those are the series I recently binged-watched during my holiday production. What shows have you seen and loved, let me know because I’m always looking for new series!