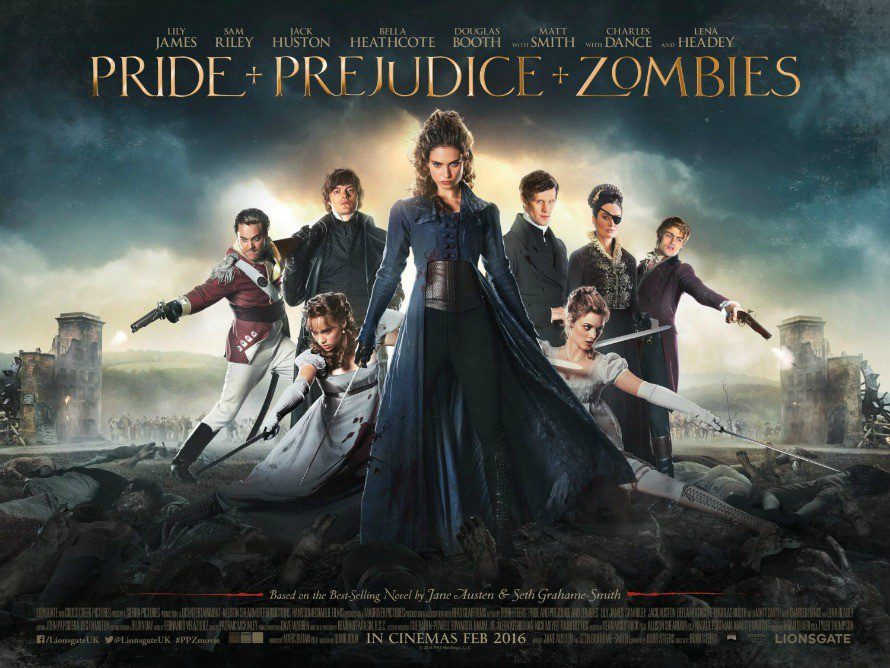 I know you are curious about Pride and Prejudice and Zombies, I was too. So much that I attended a press screening so I could do you a service and let you know if it is worth your consideration!

First, let me admit – I HATE zombie anything. I couldn’t make it through the first 30 minutes of The Walking Dead, Season One, Episode One. The only zombie movie I liked was Shaun of the Dead. And I also liked Warm Bodies. Hmmm, so I guess you can say I fit comfortably with the #ZomRomCom set. That does make sense, because I actually enjoyed Pride and Prejudice and Zombies, and it certainly belongs in this genre.

I love me some Jane Austen, and like some diehard P&P friends of mine, I was very reluctant of this film. I didn’t read the zombified version, only the original. I didn’t want to like this movie, I kinda felt revved up to rip it to shreds. And that’s not what is going to happen here. It’s actually a fun, entertaining popcorn flick that is just the right balance of flesh-eating adventure and chick flick romantic comedy. It’ll make you jump in your seat a few times, giggle, laugh out loud and then swoon at the end.

It stays pretty faithful to Austen’s original story, except with, well, a zombie apocalypse threat. Other than that, you’ll recognize many of scenes and quotes from the OG Pride and Prejudice. To the purists, I say – lighten up! It’s just a movie, it’s not replacing the legendary page-turner, it’s celebrating it in a twisted, yet still respectful, way! It’s a ridiculous and entertaining feat for a new generation of movie-goers. My hope is they will see the film, and will be inspired to learn more about the works of Jane Austen!

Based on the best-selling novel by Jane Austen AND Seth Grahame-Smith, P&P&Z is set in 19th century England, where the war between the dead and alive has been raging for a hundred years. These walking dead roam old churches, the woods, even kitchens and dance parties. So instead of only raising his daughters with manners and all the proper lady-like requirements, Mr. Bennet has ensured that his girls were trained to become martial arts experts to defend themselves. Under those frilly empire waist gowns are corsets and garter belts that serve as knife and pistol holders. They recite poetry and can catch a fly with a fingernail. And all it takes is a weak zombie groan in the woods for their blades to whoosh into action.

While the whole crazy zombie drama is unfolding, our beloved P&P storyline does as well. The brooding Mr. Darcy, played by actor Sam Riley, is one of England’s top (miserable) zombie hunters, and crosses side eye glares with headstrong Elizabeth Bennet (Lily James) at the ball – and their relationship angst begins. Thank God the chemistry is there! That’s the core of what makes this film fun. James, who recently offered her doe-eyed best in last year’s live-action Cinderella, flips the switch here to grunt and swashbuckle her way into to Mr. Darcy’s seemingly ice cold heart. This is what I loved. I think Jane Austen would give a slight smirk of approval. She wrote these characters as strong, smart women and in this version of her novel, they are badass chicks who fend for themselves.

Yes, there is an energy dip about midway in that involves Mr. Wickham’s dastardly plan, plus a few unnecessary scenes, and there are a few unanswered questions. But overall, the cheeky spirit holds up to the very end, even after the credits roll (stay and watch). You’ll find all your favorites here – the worrisome Mrs. Bennet, handsome Mr. Bingley, shady Mr. Wickham, heartbroken Jane, Lady Catherine de Bourgh (played perfectly by Game of Thrones Lena Heady) and lots more!

If you love Jane Austen, quirky chick flicks, zombies or English accents, you’ll get a kick out of Pride and Prejudice and Zombies.

I give it three strong cups of Earl Grey. With both pinkies in the air!

DVD alert – when this movie comes out for rental or on TV, you can play a drinking game. A shot of “spiced” tea every time a specific Austen quote is spoken. That oughta be fun!