Skip to content
Home » The Dressmaker: A Bizarre Delight

The Dressmaker: A Bizarre Delight 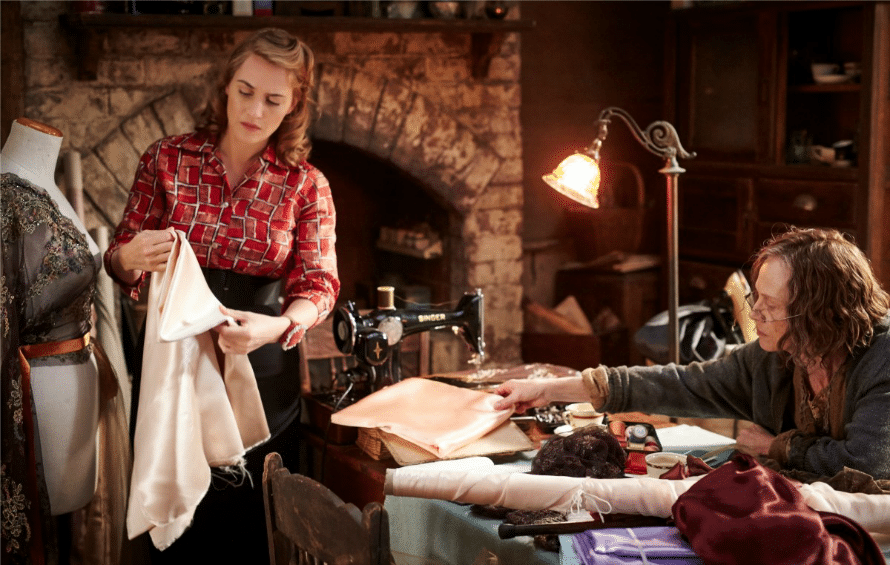 I’ve been itching for a decent “crafty cinema” offering lately and it’s HERE! The Dressmaker is everything and more. But this isn’t your typical fluffy, madcap female movie. It’s a bizarre delight of fabric, fashion, family – all stitched together with sparkly threads of dysfunctional drama.

I knew within the first few minutes of the screening this movie was based on a juicy novel. I hadn’t heard of it before, but now am determined to read the page turner by Rosalie Ham. Movies based on books, especially women’s fiction, have so much more depth and detail than your average Hollywood chick flick. The Dressmaker is proof.

Set in 1951, Australia, Kate Winslet plays Myrtle “Tilly” Dunnage. She returns home to her dusty childhood town, decked out in an outfit that looks like she just walked off set of a Vogue Magazine cover shoot. Swoon. Her first mission, aside from wiping the dirt off her stilettos, is to care for her unstable, drunken mother – and then to somehow either win over or seek revenge on the shady townspeople. Tilly has a dark, mysterious past involving murder, but because it happened when she was a child, she can’t remember the facts.

She wears this guilt like a painfully tight corset, and offers her genuine best to those around her. But they won’t have it, and once again, they deem her the outcast. It’s then she sets her plan into motion.

Revenge with a sewing machine? That’s right, she puts those crafty skills to use. Holla! 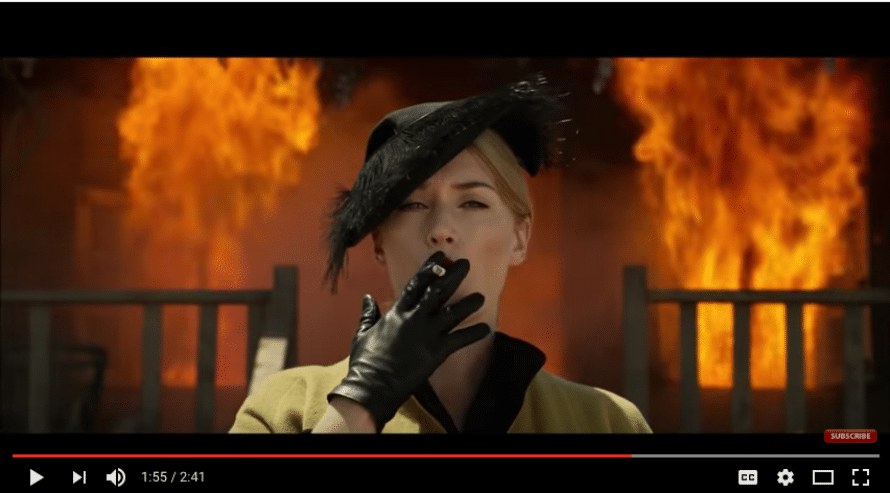 Here’s the trailer to set the mood.

What I loved about Tilly was that as much as she was a tortured woman, she was full of passion and creativity. And lots of patience. There were moments where she could have caved and taken the easy road, but she never did, she stayed true to herself, busted through her fears, and did what she felt was right.

Kate Winslet is a goddess, she really brings all of Tilly’s emotional layers to life. There are some very twisted, uncomfortable, offbeat scenarios that Kate is able to pull off because she is offbeat herself. There is a massive body count, but not in the way you’d think. Aside from Winslet, the dresses take second billing. Brilliant works of wearable art. Worth the ticket price alone. Costume designers Margot Wilson and Marion Boyce deliver magic by way of these gorgeous gowns that bring out the best – and sometimes the worst in the wearer.

When it comes to the cast of characters, there is one that fills every category: The cross-dressing police officer, the ugly duckling-turned-swan city girl, the bitter schoolteacher, the evil politician, the rival seamstress, the clueless wife. Oh, I forgot to mention Tilly’s love interest, Teddy (Liam Hemsworth)!

Again, don’t expect a perfect, fluffy heartwarming mother-daughter flick. Every plot line in this film is dysfunctional, melodramatic, sometimes cliche, but that’s ok because most of the time it works. While I left the theater feeling exhilarated, I have to admit there were a few scenes that maybe didn’t translate well from the book. If you see the movie, you’ll know what I mean.

Here’s the deal: If you love movies like How to Make an American Quilt, Real Women Have Curves, The Help, Fried Green Tomatoes, Divine Secrets of the Ya Ya Sisterhood – you’ll dig The Dressmaker. There were moments that also reminded me of Edward Scissorhands.

Not to mention, it’s centered around sewing, and it happens to be National Sewing Month!

Let me know if you see this movie and what you thought!