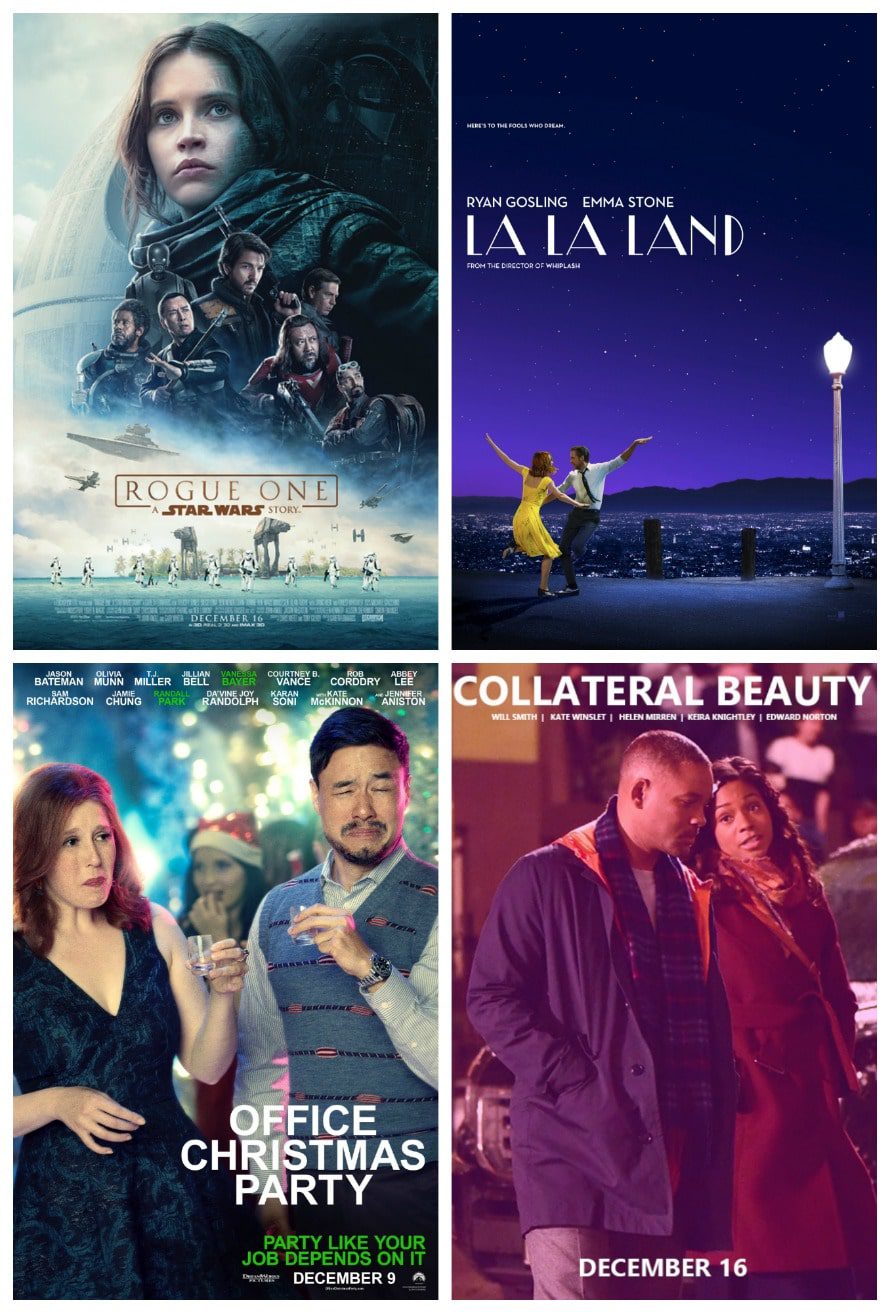 I went to four movie screenings this week and thought I’d share my reviews with you. I saw Rogue One, La La Land, Collateral Beauty, and Office Christmas Party. Three of these are great for the holiday season, but one of them is better left for cable TV.

I’ll start with my favorite and work my way down!

I expected a quirky love story and La La Land went above and beyond: Musical numbers, technicolor settings, giggly scene stealers and enough DIY inspirations to fill a hardback coffee table book. But wipe that away to reveal the main focus, the relationship between Mia and Sebastian (even their names are adorable!).

Their attraction grows at an endearing pace and swells with soooo much hope for a happy ending. These aren’t your basic big screen star-crossed lovers. They each have a unique big picture dream and do their best to incorporate their relationship into the plan. It’s about making the leap to better yourself for the love of another, but what happens when it takes you in a different direction?

After all the dreamy moments they shared, can they – or rather will they make it work for the long haul? It’s not an easy answer, but it sure is beautiful to witness. If you loved movies like Moulin Rouge, Amelie, Sing Street and/or 500 Days of Summer, you’ll be charmed by La La Land!

I’ll admit, I am not a sci-fi fan. But I do love the Star Wars films, mostly because of the characters and storylines, not so much the intergalactic fighting. I screened Rogue One only because of the hype. I wasn’t familiar with any of the characters, yet the diverse casting really impressed me. I knew nothing about the story, where it fit, the timeline, but knowing the team behind Star Wars, I figured it had to be somewhat entertaining.

WOW. It blew me away.

I loved it. Just a scooch below The Force Awakens, only because of the old gang reprising their roles. Aside from that, Rogue One caters to your every emotion. It’s equipped with humor, angst, mystery, action, even a bit of romance, possibly. You will be pleasantly surprised. I don’t want to give away any spoilers, but this is another epic, iconic film to enjoy with the family. If you have little ones, keep in mind there are many battle scenes, very little blood, but lots of shooting.

There are some tense moments, and it’s a long film. Truth talk, there were scenes that could have been edited to move the story along faster, but on second thought, why would we want that? Rogue One is an experience to savor because you’ll spend at least the rest of the day reviewing all the plot points and scenes in your mind. Just like The Force Awakens, you’ll leave the theatre with a strong sense of hope – and a craving for comfort food.

Yes, this is one of those ridiculous holiday films for grown-ups. But you know what? That is totally cool. Sometimes we don’t want a magical Santa at the mall or a tearjerker scene under falling snow. We want to cut loose and Office Christmas Party has it all scheduled for your viewing pleasure.

A brother-sister feud leads to a massive unapproved party where everyone gets wasted in the most creative way possible. Well, actually, maybe not quite. There are the standard set ups – the couple who brings their kid with an iPad in tow, cocaine mistaken for snow, a prostitute, people gettin’ fresh with the copy machine. We’ve seen it all before.

What makes this flick fun are the actors – Jennifer Aniston, T.J. Miller, Jason Bateman and my fave, Kate McKinnon. While I didn’t love her role in Ghostbusters, she won my heart here. She plays the uptight Human Resources director who loses control of her gig thanks to the shenanigans. There are a couple scenes of nudity, lots of partying, drinking, cussing, so don’t take Nana or little Jimmy! Bottom line? It’ll give you some holiday cheer and keep you laughing too.

Worth a Tuesday night discount or matinee.

I expected this film to be at the top of this list. And it ended up at the bottom. It’s not horrible (although it is receiving awful reviews), it’s just not as good as the others. See? I like to word it nicely. It’s about a shiny, happy, blessed entrepreneur whose life and mind changes dramatically after the death of his six-year-old daughter. In trying to cope, he writes a strongly-worded letter to Death, Love and Time, and he mails them. When each of them visit him -ala A Christmas Carol, he inches his way to accepting his loss. But is it for real, or is he seeing things? Or is it all an elabortate set up to make him look crazy so his best friends can sell his company while he is still grieving?

What messed up this film for me was that it tried so hard to be “powerful and moving.” There were so many heavy, blatant, cheesy dramatic moments. You can have the best actors with the best deliveries, but there has to be at least a bit depth. The emotions felt very forced and manipulative through the entire film.

My friend, Randy, also attended the screening and said he hated the dialogue that sounded like greeting card sentiments. THAT WAS MY FAVORITE PART!  Lol! I loved those pep talks, so that’s what I loved most about the film. And I loved the beautiful holiday scenery.

Um, that’s the most positivity I can offer for this one.

Save this one Netflix or cable TV. It’ll wear you down more than cheer you up.

What have been your favorite holiday movies so far?