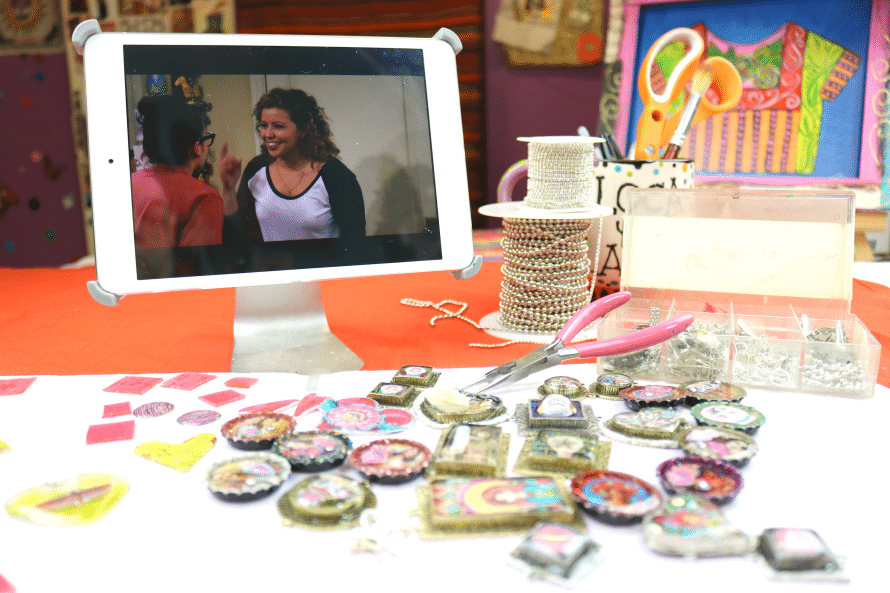 5 Reasons to watch ‘One Day at a Time’

Here are my five reasons to watch One Day at a Time, the new series on Netflix! When I first heard Norman Lear (the man behind the original 70s sitcom) planned to reboot the show with a Latina spin, I wasn’t sure what to think. First, above all, I felt very excited and crossed my fingers it would be creative, respectful and show our culture is a positive light.

Then this Netflix campaign came about toand I jumped at the chance to participate. The 15-part series debuted January 6, and I spent the entire day making jewelry and watching every episode.

I really loved it for so many reasons. I think you will too! Here are my five reasons for you to watch.

Norman Lear. He is the king of family sitcoms. I remember being a little kid and watching All in the Family, Sanford and Son, One Day at a Time, The Jeffersons, Good Times, and Maude. At the time, many of the topics went over my head, but looking back I realize this guy pushed the envelope by displaying real life, race, class, work, and family issues. This latest offering presents the same spirit and energy. There are moments when you might roll your eyes at the laugh track, but a minute later, you are choking back tears. I’m talking all the feels…I became hooked by the fourth episode, and by the last one, I sobbed from heartbreak then morphed into happy tears, then belly laughs.

Multifaceted Latino life. The Alvarez family is Cuban-American and the household includes three generations, from the conservative abuelita (played endearingly by Rita Moreno) who immigrated to America at 15, her daughter Penelope (Justina Machado) and her two teens (Isabella Gomez and Marcel Ruiz). While the grandmother speaks mainly Spanish and has a heavy accent, Penelope and the kids straddle both worlds. Not to mention, the kids’ strong forward-thinking personalities, technology, stressful post-military life, teen romance, dancing and so on. They love their Cafe Bustelo as well as Starbucks. Even though my family is Mexican-American, I saw many similarities to my family, especially when my nana would come to stay with us. As much as we joked with her about her “old-fashioned” viewpoints, she often served as the negotiator and the buffer between my parents and us kids. I was impressed that this show offered a slice of life from an American family that just happened to be Latino.

The cast. Can I just say Rita Moreno slays in her role as the sassy abuelita? Not only is her comedic and dramatic timing on point, so is her fashion and yes, she throws out some memorable moments from her classic roles. At 86 years-old, she is in top form, I’m talking #GOALS. If there was one thing I’d dial back, it’s her accent in this series. It’s way over-the-top and I know it’s meant to add the funny, and for any other actress it might be needed, but for our Rita, she could have pulled off this part flawlessly without that gimmick. I also serve props to Justina Machado as Penelope. I’ve always seen her in supporting roles, but she shines as the center of every episode here. She’s a badass military vet, and owns it. Yet, she is also vulnerable and isn’t afraid to confront that. She’s a great female role model of self-love, truth talk and owning up to mistakes. My other favorite is Elena, the teen daughter. In her struggle to be independently fierce, she often has to fall back on her mom when life crashes and burns. The mom-daughter relationship makes my heart tingle, it made me miss Maya who is now in Los Angeles!

Storytelling. Each episode not only reveals more about the family but also drops breadcrumbs for an emotional season climax. By the time we reach Episode 15, we’re invested in each character and worry about their outcome. While each installment can stand on its own, pay attention to the little creative breadcrumbs that are left along the way. Everything has a purpose here. Whether to move the story forward or add more layers to the characters and their challenges it all adds up to great storytelling. I loved that each character took a turn to have their moment. Well, except for the son, but I’m sure his time will come next season (there better be a next season!). He’s not just a goofy kid for comic relief, We see him as a typical preteen with sly moves early on, but by the last episode he has grown into a smart young man, ready to go the extra mile for his family.

Netflix! You can binge watch every episode from your craft table, just like I did.  You don’t have to wait week by week for the next episode, it’s all right there to watch and rewatch. Make sure to rate each episode! I would personally like to say THANK YOU to Netflix for giving us a high-quality show where we see positive, loving characters that reflect our lives. No maids, drug dealers here. 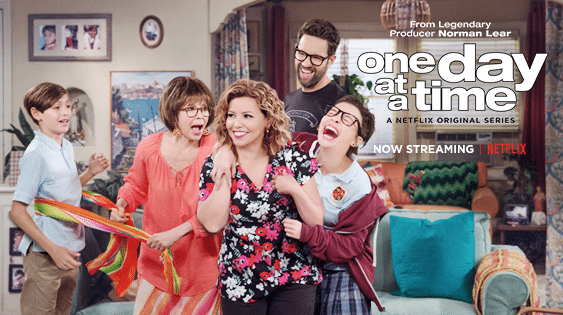 About One Day at a Time
This new Netflix show comes from legendary producer Norman Lear, known for his hit-TV shows Sanford and Son, All in the Family, The Jefferson, as well as the original One Day at a Time. This new take on the original show follows a Latino-American family and their cross-generational experiences. The series, a multi-camera comedy, will follow three generations of the same Cuban-American family living in the same house: a newly divorced former military mother, her teenage daughter and tween son, and her old-school mother.
Love & light,