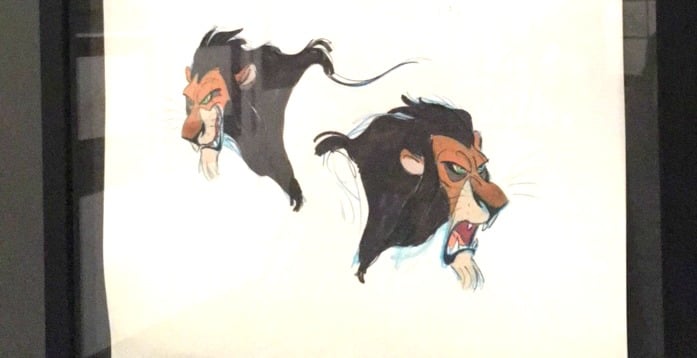 It’s easy to forget when you’re sobbing uncontrollably over an emo scene, like when Scar betrays Mufasa in The Lion King. We have Andreas Deja to thank for those tears of disbelief and anger. He’s the one whose talent and mad artistic skills brought Mufasa to life.

And now we can see some of the behind-the-scenes action. The Walt Disney Family Museum’s current exhibit, Deja View: The Art of Andreas Deja features the Disney legend’s original sketches and sculptures of iconic characters such as Mama Odie from The Princess and the Frog; Jafar from Aladdin, and yup – Scar from The Lion King. The exhibit runs through October 9th. If you are a hardcore Disney fan, or an artist seeking inspiration, this show is a must-see if you are in the San Francisco area. I was one of 26 bloggers chosen to visit The Walt Disney Family Museum to view this exhibit, and it filled me with a hefty load of inspiration. To see Deja’s actual pencil, and even inked, renditions of Scar gave me so much motivation to keep drawing out my ideas. It’s not about fancy tools, it all drills down to putting that hand to work to bring every nose-to-toe expression to life before you move on to the next step. I spent several minutes soaking in the drawings – each stroke, shade and highlight because together they create the lion we love to hate!

Seriously, I have a breakdown every time I watch that infamous scene. *sniffles and bites knuckles* The 60-year-old Deja, who was named a Disney legend in 2015, is responsible for many of our beloved Disney personalities, including King Triton, Lilo, Gaston, and many others. As we entered the exhibit, his photo and artist statement greeted us and definitely relayed his youthful spirit and love of all things creative. Lesson learned – Deja was only 13 when he knew he wanted to work for Disney. He didn’t waste any time asking how to do that, he went straight to the source and stayed focused. Also on exhibit was the exhibition, Awaking Beauty: The Art of Eyvind Earle. Earle was the animator behind Sleeping Beauty and he had a similar story of pursuing a career with Disney. After we toured these shows, we entered a separate building that showcased the entire life story of Walt Disney. There is no movie, collector pin, T-shirt or ride that can compare with the power of his story. This was a man who endured so many set backs both personally and professionally and still pushed on. As a creative entrepreneur, I was so happy to experience this museum. I highly suggest you take a day to visit. It will change the way you experience all things Disney, they all will have deeper meaning and appreciation. One of my favorite features there? Walt Disney’s Griffith Park Bench. One of two. The other one is behind a velvet rope at Disneyland, but this one at the Museum – we were allowed to sit down on it and soak up his energy. What makes it so special? This is one of two benches he sat on to sketch and brainstorm Disneyland! And by the way – here is a treat! Fans of The Lion King will be proud to learn the film joins Snow White and the Seven Dwarfs, Beauty and the Beast, Pinocchio, and Bambi in the exclusive Disney Signature Collection, and will be released on Blu-Ray on August 29th.

About the Walt Disney Family Museum: Founded in 2009 by Diane Disney Miller, it features the life and history of Walt Disney.
104 Montgomery St, San Francisco, CA 94129