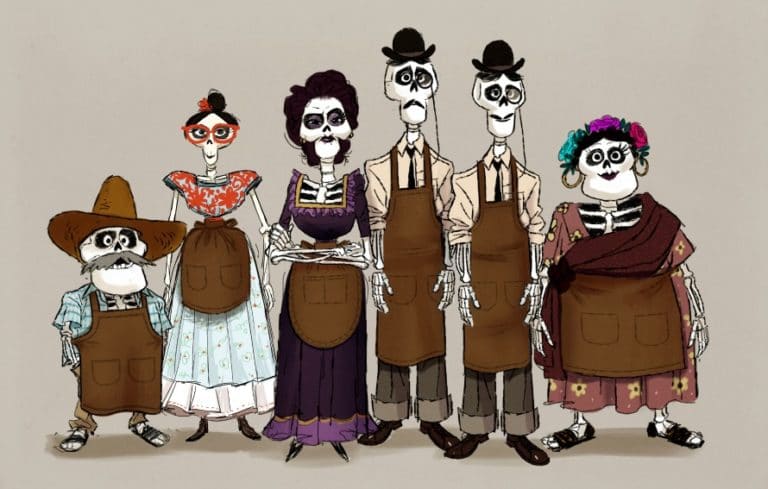 Disney Pixar’s COCO Free Coloring Pages and so much more…

When you love Dia de Los Muertos as much as I do – every little detail matters. A big one is the artful style of the skeleton. There are so many fabulous, talented painters and illustrators who add their own personality in a range of textures. Stubby skulls, long stretched skulls, skeleton chi-chis, muscles and don’t even get me started on the face paint designs.

If you love all things Day of the Dead, you’ll love this movie!

Disney Pixar’s COCO Free Coloring Pages, scroll down to the bottom of the post!

When I heard about COCO, this was one of the first matters that popped in my head. What a big job to tackle – how to bring the skeletons to life in a way that we hadn’t seen before, yet a way that stayed true to…well, a skeleton.

As part of the #PixarCocoEvent I went on in August (26 bloggers were invited to a press trip for the film), we were able to sit down with the different teams of filmmakers and ask loads of questions after watching the first 35 minutes of the film.

For this session, we met four of the digital artists who had the task of imagining, designing, animating and clothing for the skeletons in the Land of the Dead.

One of the things we learned is that Pixar had to write new software for the film all because of clothes! Yes, that’s right! You see, as animators dress living human characters in other films, the tried and trusted software they use creates the illusion of fabric that naturally lies on the flesh of a body, and floats and moves. It all has to do with calculations, engineering, etc.

Now with COCO’s people in the Land of the Dead, they don’t have flesh, the software wouldn’t work. The team had to set aside the creativity and put their math skills to work. They made it happen! They created animation software that created clothing that moved and draped naturally with the movements of bones. Not only that, they also created software that shaded each and every bone in the film.

I’m kinda jumping ahead of myself. Before all of that, the team had to decide what kind of style they wanted for the skeletons.

Starting from scratch to bring them to life

“The skeleton characters in COCO were some of the hardest characters we’ve had to create here at Pixar for a many number of different reasons,” said Character Art Director, Daniel Arriaga.

Arriaga said they started with research of the skeleton and skull. They had to look beyond the obvious and find the factor of “appeal.” How could they take something so bare and cold, and turn it into something loveable and warm? And make them each unique from each other?

RELATED: 10 Facts About Day of the Dead & How Disney Pixar’s Coco Incorporated Them

Arriaga said they learned the names of all the bones in the human body and even studied the muscles, even though skeletons don’t have them. The team created different versions of the skeletons in different types of clothing, with and without teeth, the jaw connected and not connected, and more varieties and presented them to the director to choose.

How to make them move naturally

The next hurdle was putting the first images in the computer. Supervising producer, Gini Santos said it’s called a rig – a 3D model. And just like living people, the action starts with a walk cycle. It’s a way to see the movements of their sketches.

“We know they are light in weight, Santos said. “Skeletal structure is only 20% of our body weight. So how much can we break from our animation principles of weight and balance? What’s holding the bones together and how much space can we leave between them?”

All of those factors come into play, and again, it’s the director who has the final say.

Wow, look at all those characters! All I could think about was how much detail went into each facial expression, strut, and hand gesture. One of my favorite parts of the skeletons is the way the artists translated their living versions into the dead versions. They broke free from the anatomy manual and used the skeletal structure to relay personality. Very clever!

At the end of the session, we had an opportunity to ask questions. Of course, as an artist, I had plenty. Considering all the hours they dedicate to the making of the film, and each movement of each character, are they able to shut COCO off once the work day is done?

They unanimously agreed they can’t.

“Sometimes there’s nothing happening here during the day, it’s not working, then we go home and get inspired by something,” Arriaga said. “It’s hard because a lot of people don’t realize how hard these movies are to make. How much tears and anger go into it. And the reason for it is passion. We want to make these films great.”

These will be so wonderful to use in your Day of the Dead crafts and more!