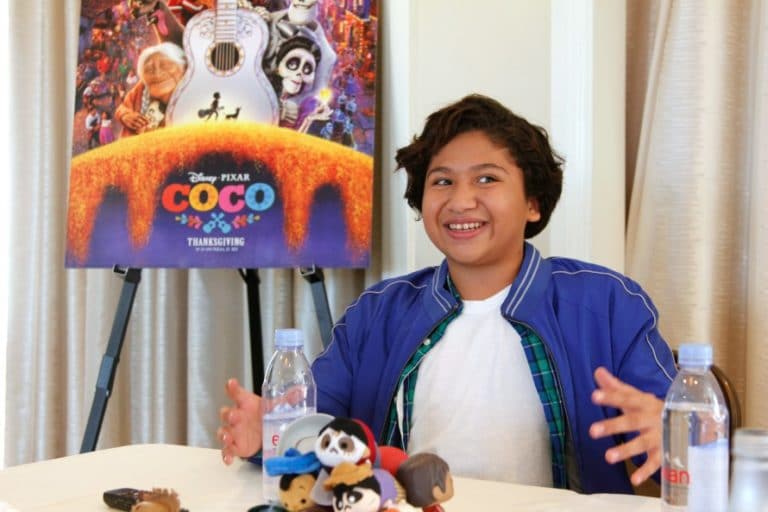 Out and about the city this weekend, the one thing I heard multiple times – “I saw the Coco movie and loved it!”

And they sure did. Coco rang up $71.2 million dollars over the five-day weekend, making it the fourth largest Thanksgiving weekend opener. Let that sink in – a Latinocentric film, made by Latinos, starring Latinos, set in Mexico… topped the American box office!

The movie is a fantastic, emotional experience for all involved, behind the screen and in front. And yes, it was a group effort on Pixar’s part, but there is one secret ingredient to its success.

Anthony Gonzalez, the voice of Miguel.

This 13-year-old kid had a huge responsibility. The character of Miguel holds the entire movie together. The plot revolves around his plight. The animated character was designed around his personality and facial expressions. That’s a lot to handle for a newly minted teenager.

But Anthony Gonzalez delivered the goods effortlessly. After meeting and interviewing him on the press junket, it was easy to see his fuel is enthusiasm. He embraced every ounce of the opportunity.

It helped that he had a lot in common with Miguel.

“I feel like me and Miguel just both want to pursue our dreams,” he says, gesturing his arms wide in the air, smiling brightly. “Miguel looks at his idol, like he wants to be just like him. That’s the quote he says – “I want to be just like him.” And like, I have a lot of singing idols and acting idols. I want to be just like them, too. So I’m very similar to Miguel, because we both just love the music. We both care about of our families, a lot, and we know how important that celebration of Dia de Los Muertos is, and, yeah. That’s what I love most about really doing the voice of this awesome character.”

Anthony is so animated as he speaks about his experience with Coco, he looks as though he is about to burst into song at any given moment. And sure enough, he does!

He then tells us Coco’s theme of Day of the Dead is personal to him. His grandfather passed away when Anthony was six. He celebrates Muertos as a way to honor his memory.

“I do celebrate the Day of the Dead,” he says. “The time I actually started celebrating like, really, was when my grandfather passed away. He was very special to me, because he was always there for me, and he would just be so funny, and he was always there to support me in what I loved to do, which was sing. I would love to celebrate the Day of the Dead, because it was a day where I could be with him, and connect with him once again, and that’s why I loved this joyful celebration. And I can’t believe I’m part of a movie that celebrates and shows this wonderful celebration.”

Sitting next to Anthony is actress Alanna Ubach, who voices the feisty Mamá Imelda. The half-Mexican, half-Puerto Rican actress is known for a body of supporting roles including everything from The Girlfriends Guide to Divorce to Legally Blonde.

In this role, Ubach had a juicy range to work with. A woman scorned who must learn to forgive. The actress says she relied on a family member for inspiration.

“This is based on my Tia Flora,” she says. “When I was a little girl, I remember her inflections. She was very grand. She was a very ornate character, and such an important figure growing up when I was a little girl, because, I remembered, it being eight o’clock in the morning, she had a full face of makeup on constantly, and she always wore her high heels. And at Christmas time when she entered the room, she was, “Merry Christmas, Feliz Navidad!” I was so put off by her as a little girl, because she was just too much, but now as a woman in my early forties, I can look at this woman with such respect.”

A shout out to Tia Flora, because Mamá Imelda is fast becoming a fave in the movie. She confessed she felt intimidated when she first signed on to the project. Stepping foot inside Pixar headquarters made her nervous. But once the filmmakers showed her the sculpted figures of all the characters, she began to bond with the role and that eased her nerves.

And those sculptures came in handy during the recording process too. They served as stand-ins for the actors.

“It really did help to actually not meet Gael and Benjamin in person,” she chuckles. “It made it even more magical to actually portray, because you’re actually looking at these figurines, rather than the person that you are star struck by. You want to say, “I loved you in Y Tu Mama Tambien, you were amazing in that.”  So, it really did help to just be given the sculpture.  Because I’m pretty sure I would have been a little too star struck and nervous to act with him.”

Doesn’t she sound like a good sport? She even broke out into song as well. Right there at our table. She shared a Spanish-language lullaby she sings to her baby, and gave us all goosebumps.

That family-like energy is what makes Coco so special.

Anthony sums it up perfectly.

“What I hope that the audience gets from watching this wonderful movie is, basically, like, if they have a secret passion that they have,” he says. “Share it with the world, and do what they want, to do in life, and do what they love. And to really, really know about the wonderful culture, Mexican culture. And the wonderful celebration of the Day of the Dead. And maybe, who knows, maybe they will start celebrating, ecause it’s a universal celebration!”