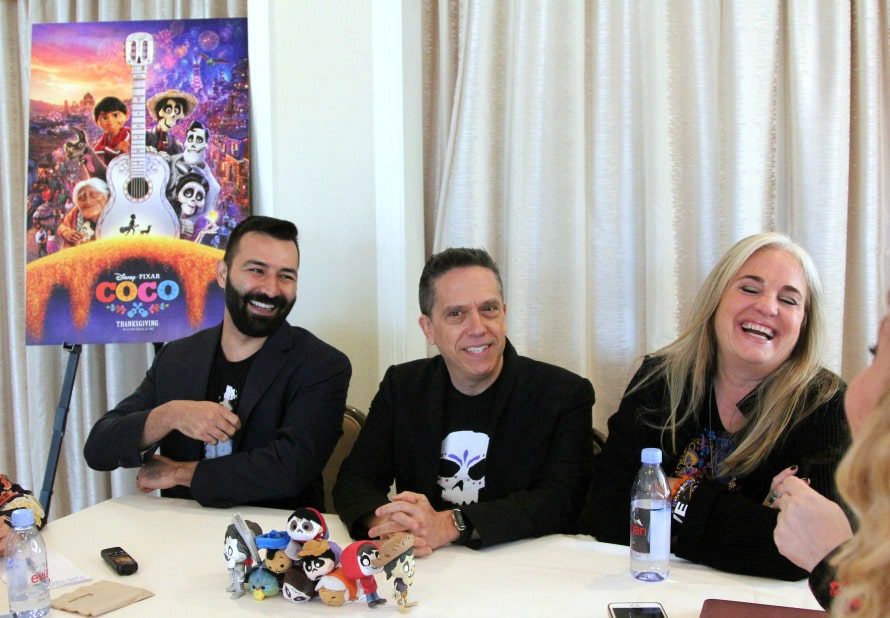 What the Filmmakers of Coco Want You to Know! #PixarCocoEvent The filmmakers of Coco had one goal in mind – to create a visual love letter to Mexico. And in doing so, make us cry.

And boy did they come through with that goal. If there is one unified comment from moviegoers, it’s about the need of tissue once the story has fully unfolded.

So does that mean director Lee Unkrich is smiling at our sorrow?

Yes, but for a good reason.

“I don’t know that I like making you cry, but I like making you feel something,” he says from the Coco press room at the Beverly Hilton. “I mean, I know that when I go and see movies, they’re very few and far between where I actually feel genuine emotion or a movie really sticks with me after I’ve seen it. So, you know, when we make our movies we try to do that. There’s no guarantee that we’ll be able to, but I think, you know, that’s the most satisfying for us if we can have the audience feel something personal to themselves and, we know we’re on the right track when we have those feelings ourselves.”

We gotcha, Lee. And you got us. Some YouTube movie reviewers even offer tips for the best kind of tissues… “don’t use the theater napkins, they are too hard and crunchy!”

The story was skillfully crafted early in the development process. In fact, Adrian Molina says the nugget of the most pivotal frames began with one emotional scene at the end of the film.

As far as “that scene,” Molina explains the idea was executed in the very first screening of the film. It’s not uncommon for ideas to change and evolve, but in this case, the idea stuck like icing on a sugar skull.

“We were all very affected that first time that we put it together,” Molina says about that poignant musical moment between Miguel and Mama Coco. “But, it was then years afterward that we continued to refine the movie and change the story leading up to that point. We had to just trust in that initial feeling that we had when we first put that scene up.”

And we are glad they did. But it took much more than just writing a scene. It also involved many layers of relaying storytelling in an authentic way. A task producer Darla K. Anderson says didn’t come with a simple snap of the fingers. Everyone from the animators to the writers to even the lighting techs had to come together to create a world we, the audience, believes in.

“In order to, to feel all those feelings you’ve had to go on a journey with all of our character,” she says. “And you’ve had to, you know, laugh with them and be on big adventure with them, and become completely invested with them. We have to earn, we have to earn all of that emotion. So, it comes out of a multitude of the emotions from the movie.”

People are loving Coco because it offers entertainment on so many levels, much of which is comedy and even a dash of history here and there. Aside from showing Dia de Los Muertos in all its marigold glory, if you pay close attention to detail, you’ll see many familiar faces pop up. This is a great reason to see the film more than once.

“We tried to fill the film with as many kinds of famous Mexican celebrities as we could,” director Unkrich says. “Some of which we knew would be recognizable for general audiences, but some we knew would only be, you know, only people who grew up in Mexico would know. People like, Pedro Infante and Jorge Negrete and Cantinflas, Maria Felix, El Santo of course, Esquivel… I made, Juan Carlos Esquivel is the guy who’s playing the glass harmonica before the talent show. You know, he’s the glasses.”

Adrian Molina chimes in on this topic as well.

“So much of that was inspired by the fact that we’ve got this once in a lifetime opportunity to literally go into history,” Molina says. “And Miguel is this kid who wants so much to use his music to connect, but he doesn’t have the, the role models to be able to help him on that path. So what a wonderful opportunity to lean on these Mexican icons who used their art to change the world, and, and let them be the kind of characters that kind of inspire him and push him.”

And everyone’s favorite Mexican painters, Frida and Diego, even make a cameo.

Have you seen @pixarcoco yet? Guess who has a cameo??? ❤️❤️❤️

Another important factor the filmmakers made sure to include – a timeless setting. You may not even notice, but there are no dates related to the story, present day can be today or last decade or years ahead. They did this with the wishful thinking that people will watch the film years down the road and it will still be relatable. But the overall non-negotiable aspect of making Coco? An all-Latino cast and crew. Unkrich confessed he bypassed his usual go-to list of actors and instead opted for bringing in new talent that represented Latino culture.

Overall, Unkrich, Molina and Anderson just want audiences to walk away with one thing in mind. And it has to do with Dia de Los Muertos and Mexico.

“It’s been, it’s been very overwhelming in the most beautiful way,” writer and co-director Molina swoons. “But, but it just felt like all we could do to say, you know, thank you so much for opening your hearts, opening the doors and, you know, maybe a gesture on our part to say what a beautiful tradition. This (Day of the Dead) is where it comes from everyone, you know, take notice!”