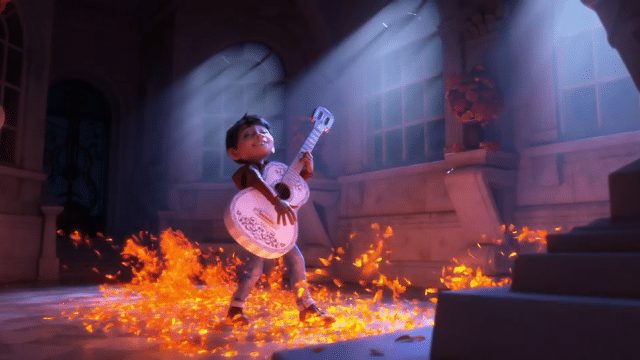 A song can make or break a movie. In the case of Coco, the new Disney Pixar feature about a boy who crosses over to the land of the dead to find his relatives, there are plenty of tunes for audiences to connect with.

Check out this video about the music of Coco!

The first thing the they did to launch on their Coco adventure, was to visit Mexico. Their mission wasn’t just about gathering inspiration, it was about really infusing their soul with the passion of Mexican culture, via song.

Consultant Germaine Franco explained how they went into different plazas in different cities and just say and absorbed the energy and activity. She noticed that each corner featured a different musician belting out a different kind of music – from rock to ballads to folk. The team made sure to capture that vibe in the scenes in Coco when Miguel visits the plaza and finds out about a contest he plans to win.

Adrian Molina, writer and co-director said it was important that each song not only relayed emotion, but also set the right tone for specific scenes.

As a music lover of many Disney films, I know that a song is a hit when you can surf YouTube and see an array of covers. Such is the case with Recuérdame (Remember Me). In the film, Benjamin Bratt delivers the honor, and then there is this gorgeous music video by Miguel featuring Natalia Lafourcade.

And here are a couple covers already up on YouTube!

And our favorite music correspondent, Will Medina reviewed the soundtrack!

Let the Coco soundtrack transport you to the colorful and vibrant Mexico!

Who said music can’t transport you to a new world? The Coco soundtrack will tug on your emotions and bring back memories of traditions and culture. Día de los Muertos never sounded so fun and alive!

The beauty of this song collection is it works all year round for all kinds of settings and ages. Check out the many playlists on Spotify to find the right vibe. From instrumentals to vocals and covers, there are a lot to choose from. Coco is the story of a boy named Miguel excited to be growing up with his family of shoemakers in the bustling Mexican village called Santa Cecilia. all is well except for the fact that his family has banned music. After uncovering secrets about his family history, Miguel accidentally ends up in the mythical Land of the Dead and decides to use the opportunity to reclaim his birthright as a  musician, just like his idol, Ernesto De La Cruz.

The soundtrack features a vast array of original songs written for the movie, one by Oscar winners Kristen Anderson-Lopez and Robert Lopez of Frozen and the others by Germaine Franco and co-director and screenwriter Adrian Molina.

You’ll find top notch talent here. There are multiple tunes that will go on to become classics. From late night pub karaoke to kiddy birthday parties.

I am failing in love with the Miguel and Natalia duet Lafourcade so much!

There are so many great songs in this movie I can’t wait to hear the entire album! Make sure you check out some other amazing tunes from the movie.

Make sure to study those Spanish lyrics 😉 so you’re ready for a sing along during the film. Pick up your copy of the Coco soundtrack, you’ll be so happy you did!