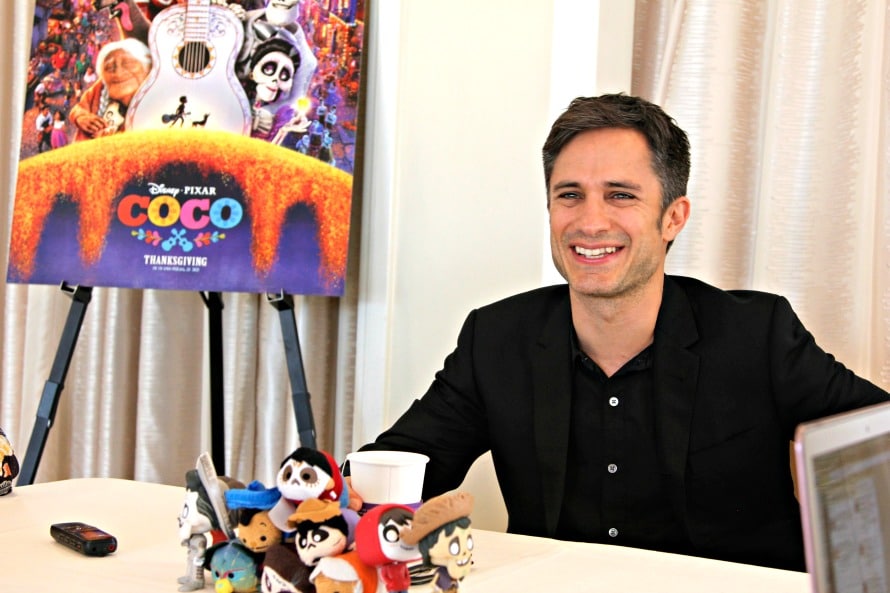 That’s how Gael García Bernal describes his new movie, Coco, which opens nationwide November 22. He is sitting at the end of the long table, answering a barrage of questions from two dozen female bloggers. The energy is buzzing, but he stays focused on speaking from the heart about his experience working on the film that takes place on Dia de Los Muertos.

“Si, transversal, transversal,” he says earnestly as he holds a paper cup containing his hot tea. “It invites a very personal point of view, you know, the Day of the Dead because it’s a reflection on death and nobody has the definite answer on what happens after (he chuckles) after you die, no?  So, it is a reflection on death that we all engage in it on a very personal level.”

Stepping into the hat of Hector

We know the 38-year-old actor from films such as Y Tu Mamá También, Mozart in the Jungle, The Motorcycle Diaries, and dozens of other English and Spanish-language movies, but not as a comedic animated character. Born in Guadalajara, Jalisco, Mexico, the actor is often associated with roles where he plays a handsome and mysterious charmer.

But not in Coco.

When the filmmakers approached him to voice the character of Hector, a goofy personality from the Land of the Dead, Bernal eagerly accepted. The animated skeleton version of Bernal sports raggedy jeans, a crooked straw hat and is disrespected by just about everyone in his hood.

Hector, as it turns out, is a character with many layers. They aren’t visible early in the film, but as the story progresses, so does Hector’s true motives for wanting to get back to the Land of the Living. He grows on you and will kidnap your emotions long after the credits roll.

Seize the moment – or nah?

This aligns perfectly with Bernal, as he is someone who seeks deeper meaning in life.

One of the popular phrases in the film is when Miguel’s hero, Ernesto de la Cruz. proclaims “Seize the Moment!” It sets little Miguel off on his journey to find the perfect moment to seize. But to Bernal, the phrase isn’t as empowering.

All activity in the interview room stopped as we all waited to hear his explanation.

“It has made us burn the forests that we have in front of us, you know, it has made us live the now as if there was no tomorrow,” he says. “As if we’re not engaging with a responsibility that freedom gives us to know that there’s a future. And there are people that will come after. It is not a rush, life is more, it’s more a craft…”

Rather than seizing the moment, we should be seizing long-term life. Did your heart just melt too? I realized this man wasn’t just an actor, but a humanitarian. He truly thinks – and loves –  on a bigger scale.

Working with his daughter

But he can’t deny there was a moment he seized for the sake of Coco. His little daughter has a singing cameo in the movie! And when he felt nervous about stepping in front of the mic to record Hector’s various songs, knowing she was there helped ease his nerves.

“This is gonna be something that my daughter one day will see when she’s, I don’t know, sixty,” he says. “And it will be really, really fun to her to remember and to hear ourselves. It was such a great opportunity.”

RELATED: My 2004 interview with Gael for Motorcycle Diaries! GIVEAWAY: Tweet and leave a comment below about why you are excited to see Coco, and you’ll be entered to win this collectible pin we received!
a Rafflecopter giveaway