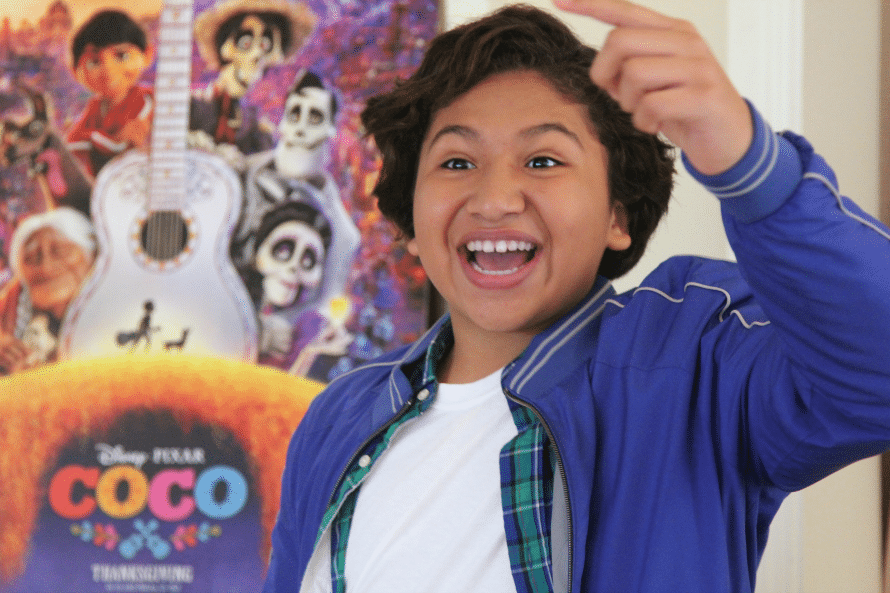 Rewind to four months ago. 13-year-old Anthony Gonzalez couldn’t stop smiling. As the voice of Miguel in Disney Pixar’s, COCO, he lived every kid’s dream – top credit in a blockbuster Hollywood film.

And things like rubbing elbows with celebrity castmates/new pals, Gael Garcia Bernal and Benjamin Bratt. Reciting “Thank you!” repeatedly from scores of moviegoers who fell in love with the magic he brought to the film.

And the merchandise made in his likeness: Everything from plushies to water bottles, ornaments, shirts, and jewelry. There are even several Miguel dolls with Gonzalez’s voice.

You’d think all that fame would go to his head. Thankfully, Gonzalez is just as sincere as the character he played. And just as happy.

I interviewed him when he visited Phoenix on a press tour to celebrate the release of COCO on digital download (out now) and on Blu-ray February 27th. As a fan of the film – and as a mom – it delighted me to see his pride and excitement with his COCO journey.

RELATED: My previous interview with Anthony!

“What really blows me away is when I see kids, babies and even adults dressed as Miguel,” he says from a cushy armchair at Phoenix’s Hotel Palomar. “It makes me feel so good and proud to see inspired people!”

He is animated as ever, smiling bright, waving his hands to relay his joy of the topic. But he was honest in reflecting back on those emotional scenes in the film, where didn’t smile at all.

If you’ve seen the movie, you know what I’m talking about. The moments that made us all sob uncontrollably.

“Miguel singing Remember Me to Mama Coco, that scene was difficult,” he said. “I had to take time to get to that state of mind. It reminded me of my grandfather when he passed away. Singing to Mama Coco felt like a way I could connect with him again. I cried. That is what made it challenging.”

COCO wasn’t the first time he delved into serious subject matter. Before he voiced Miguel, Gonzalez starred in the critically acclaimed short, Icebox. He plays a Honduran child who flees a dangerous situation in his country and attempts to cross the border but is caught and detained. Trailer link.

While working on COCO, Icebox had been picked up to become a full-length feature film, which will be released later this year. He shot the film after he wrapped his work on COCO.

“COCO is very happy, but Icebox is very serious,” he says, as he sits up tall in his chair. “Icebox is about the process kids go through with immigration. A lot of people don’t know what happens to them. I hope this will make an impact on the community and society. People will see what they didn’t know existed. The hard work of coming to a better place for a better life. (Icebox) was a journey for me. It was new for me.”

He says even though the films, as well as his daily life, may all be diverse, one factor connects them: The importance of family.

In real life, after he is home from the set, the movie premieres, and the fancy interviews, he says he is just like any other kid. Lots of family time, and big dreams of more acting jobs that make a difference in people’s lives. He’s even crossing his fingers for a COCO sequel because he’s curious to see what will happen to Miguel.

Gonzalez says he is grateful his mom and siblings support his dreams, and how they also keep him in check.

“School is always first,” he says. “Doing homework, I have to get that out of the way. Then I have to help out cleaning the house, like washing the dishes! He jokingly scoffs and then breaks into a giggle.

“To be honest, I really don’t like cleaning in general, I don’t like it at all,” he says. “My closet is soooo full of stuff, it gets stressful for me to clean my room! But I know I have to do it. I’m just like everyone else, I have to get it done!

COCO is out on digital download and comes out on Blu-ray February 27th. (NOTE: Last week’s giveaway winners have been notified)

Here is a free printable so you can map out your family tree!