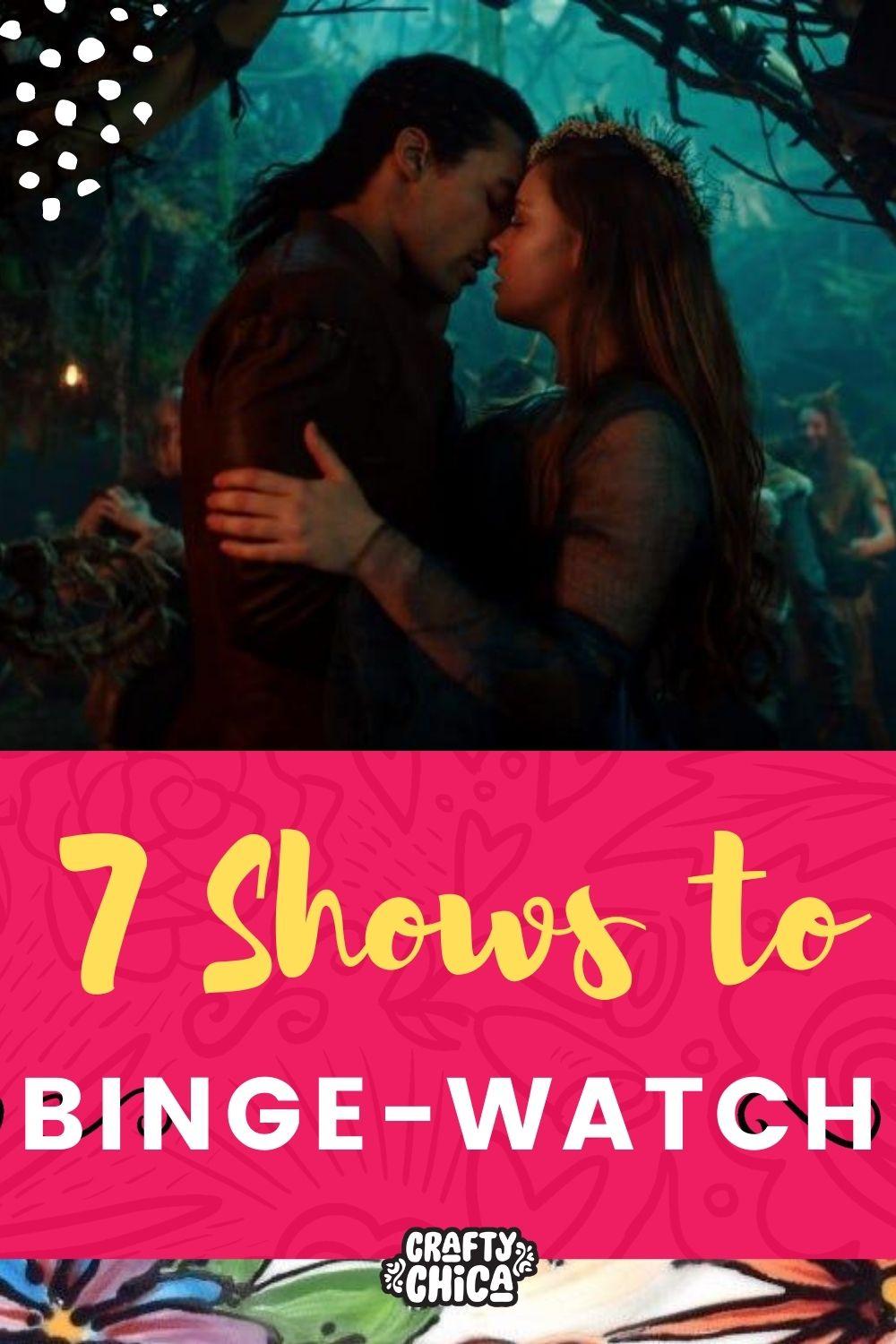 Here are seven series to binge-watch! Ever since the pandemic, I’ve been consuming a LOT more entertainment. Not just TV, but also audiobooks, playlists, podcasts, etc. I’ll watch shows while I paint or when I feel like I need a break from working.

Here’s a thing about me: I like series that are uplifting, but have a lot of drama too. I want to feel inspired and moved. Female friendships that are not toxic or that revolve solely around romance, but I still want some love tension in there as well. I’m not into heavy action, crime-solving, anything too scary or ultra cheesy dating shows. I want complex characters who make honest mistakes and then strive to fix them. And surprises, lots of surprises!

These are series to binge-watch that have all of that. So I thought I’d share what I’ve enjoyed. Because we all know there’s a moment where we stop and say, “Anyone know what’s good to binge-watch right now?”

These are in no certain order! And these are just a few off the top of my head, I’ll put another list together of books and movies soon!

I didn’t expect to like this series, but it has a Latina director, Zetna Fuentes, for a couple of episodes and I wanted to support, so I dove in. I ended up staying up until 1:30 am to see the final episode of the first season. I’m hooked and can’t wait for Season 2. This series is like a prelude/retelling to the story of King Arthur. It has magic, fairies, witches, spiders, love triangles, La Muerta and more. It’s not quite to the level of Game of Thrones but has that same warrior novela vibe. And I really appreciate that it has a multicultural cast!

I LOVE this series. I’ve been a fan of Issa Rae since her YouTube series and Insecure takes all her talent and elevates it to a universal level. The storylines are relatable to today’s dating world of social media, texting, and career. The comedy is on point. But it’s so much more than that, the friendships and romantic tension will make your heart feel some kind of way. It’s now in Season 4, so take it all in, and that ending, so emotional! Def have some comfort food on hand to soothe your spirit.

The Baker and the Beauty on ABC

It breaks mi corazon to type this, but this adorable series was canceled after only one season. It centers around a Cuban-American family who owns a pastry shop and the oldest son begins to date an A-list celebrity. It’s everything I love about storytelling – family bonding, positive parent role models, body positivity, educated Latinas, and hello – Cuban pastries! There was a petition going around to renew the series but I don’t think it went through – yet. I’ll keep you posted.

This is another series to binge-watch that is several seasons in, but it will be new to you if you haven’t seen it! It follows a trio of siblings who are already at odds with each other, but then when a family tragedy takes place, they inherit the family’s struggling sugar cane business. Written and produced by Ava DuVernay and Oprah Winfrey, it delivers in so many ways. Aside from each character dealing with their own personal struggles and relationships, this series also shows the consequences of systematic racism and dirty politics. Every episode makes me light up with joy, but then also makes me ugly cry. From the soundtrack to the storylines, you’ll be hooked too!

Did you ever watch The Fosters on ABC Family (produced by Jennifer Lopez)? I used to be addicted to that series and had no idea it spun off into Good Trouble. I like this series even better than the original! It follows adopted daughters Callie and Mariana Foster after they graduate from college and begin their respective careers in Los Angeles. They live in a bohemian communal style dwelling that used to be a theater. Think Melrose Place-meets-The Real World, kinda? These two young women are intelligent, woke, ambitious, yet flawed. Now that my own kids are grown up and moved out, I feel like this series gives insight to their world and the situations they encounter. Just like The Fosters series, it’s funny, edgy, and super-duper heartwarming!

The Bold Type on Freeform

This one is like a way younger version of Sex and the City. It follows three female creatives who work for a women’s magazine. From juicy reporting to filling the fashion pages, each character brings the drama, laughter, and tears. What I adore about this show is that it doesn’t only encompass the LGBTQ perspective, but also cultural diversity, twenty-something dating, and 50+ women. The editor of the publication is in her early 50s and she is thriving, dynamic, and sharp! She isn’t portrayed as being out-of-touch or close-minded the way other shows portray women at this age. She is #goals for women on the big and small screen!

Party of Five on Freeform

This is a Latinx reboot of the original Party of Five from the 90s. As a fan of all things Bailey and Claudia, I felt skeptical at first. But this retelling won me over in a big way. It’s about a family whose parents are deported back to Mexico, and the kids have to not only take over the running of the family restaurant but also the household. This series wasn’t renewed but at least it wraps up in a positive and satisfying way with no huge cliffhangers.

What do you think of these series to binge-watch? What are your faves? Please share!

How to Make a Chair Caddy for Books and Tablets