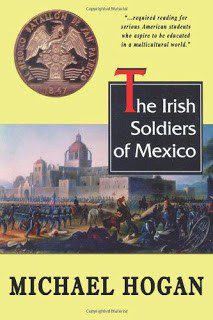 The Irish Soldiers of Mexico
by Michael Hogan

I’m excited to be a part of the Condor Book Tour for this very important title!

Publisher’s summary:
“On the eve of Mexican-American War of 1848, a group of recently arrived Irish immigrants deserted the U.S. army and joined the Mexican army as the Saint Patrick’s Battalion. This excellent study explores the motivations of the Irishmen, their valiant contributions to the Mexican cause, and the consequences for them when they were ultimately captured.
The Irish Soldiers of Mexico sold out four editions in English and two editions in Spanish from 1997 to 2001. It has been the basis of an MGM feature film starring Tom Berenger, two documentaries and has also been used in many history classes both in the United States and abroad. As Michael Hogan rightly points out in his introduction, American textbooks scarcely devote attention to this war. “Coverage,” he writes, “generally consists of a two or three page section entitled Westward Expansion or Manifest Destiny.”

This title is for anyone who is interested in the deeper historical roots of Mexican history and culture. It’s a must-read – one for the bookshelves – because it shows a side to the U.S./Mexican war, that of ethnic diversity among the troops, that is not often observed. Hogan dives into the details of the Saga of the San Patricios – a poignant battle where the Los Angeles Times says “Irish immigrant soldiers who deserted and fought for the enemy during the war with Mexico are revered south of the border, honored in Ireland and all but forgotten in the United States.” From the elements of controversy to the question of “cowardly deserters or genuine heroes,” Hogan confronts these topics head on.

I have to admit, at first I felt intimidated at this book, such serious undertones to take in. But the further I progressed, the more I became engrossed, moved, heartwrenched, curious and empowered. I’ll definitely pass along my copy to my kids to read now that they are in college.