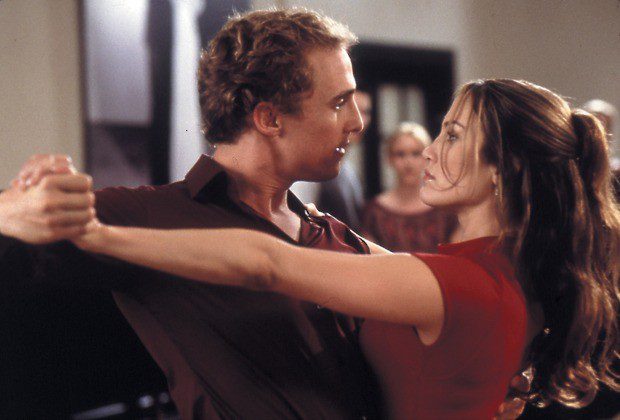 A girl can fantasize about taking Matthew McConaughey as her groom. Just know that he wouldn’t dream of helping arrange the nuptials.

“When it comes to weddings, I want nothing to do with the details,” the 31-year-old actor says as he lounges in a hotel room. “But I do want a say in the vows, the beverages and the party.”

Don’t panic — he doesn’t even have a girlfriend. He’s simply chatting about the new film The Wedding Planner, in which he plays a doctor caught in a love triangle with his fiancee (Bridgette Wilson-Sampras) and her wedding planner (Jennifer Lopez). Fresh out of the shower, and wearing nothing but a terry cloth bathrobe, McConaughey almost seems a bit too relaxed as he crosses his legs and stretches out his arms out.

“This movie was one of the easiest I ever made,” he says in his slow Texas drawl. “Wasn’t I the lucky one? Being in the middle of two beautiful women? How could I not have enjoyed it?”

Actually, the role of Steve Edison originally was meant for Brendan Fraser, who declined in order to star in last year’s devilish hit, Bedazzled. But McConaughey doesn’t consider himself an also-ran. He’s proud of all the sweat he put into the romantic comedy. He had to tango with Lopez, you know.

“I spent a month and a half taking lessons,” he says. “It was difficult. I mean I do know how to dance. I have rhythm. But this dance is so disciplined, and then having to learn dialogue on top of that.”

His break into show business rings familiar. Ever heard the one about the girl who was discovered in the soda shop? For McConaughey, it was a bar called Villa’s in Austin.

“I had once never thought of acting,” he says. “But this casting guy told me he thought I might have screen charisma. He sent me out on an audition, and I got the part.”

That part was for Dazed and Confused, which he says is his favorite. Not because of his “That’s what I like about these high school girls: I keep getting older; they stay the same age” role, but because it was his first on-camera experience. These days, he’s thinking of dusting off an old college project.

“I once directed a documentary called Chicano Chariots,” he says. “It’s all about the low-rider culture. I was really fascinated by the whole Chicano scene. I mean, who would go so far as to dip an engine in gold? I was very happy with the outcome. I have the video at home, maybe I’ll do something with it.”

Despite the Hollywood status, he’s more than just another nude bongo player. His so-called high life centers on acting, spending time on his Texas ranch and long-distance driving.

But doesn’t a girlfriend fit in there anywhere?

“Finding the right person isn’t anything you can plan,” he says. “I’m not into seeking anyone out. If it happens, it happens when the time is right. I’m certainly not on any time program.”