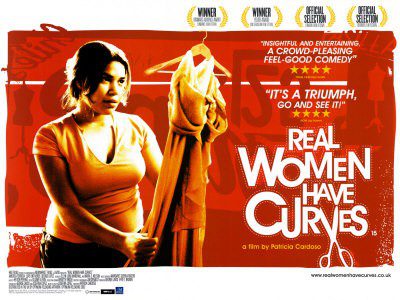 NOTE: Before blogging, I used to be an entertainment reporter for a daily newspaper, where I interviewed dozens of actors. Enjoy this article “from the vault” my interview with America Ferrera.
By Kathy Cano-Murillo
The Arizona Republic
October 31, 2002

What many women try to hide, America Ferrera has displayed for the world to see. We are talking belly rolls and hefty thighs. The 18-year-old stars in the new film Real Women Have Curves as a smart and ambitious high school graduate whose plus-size figure serves as a thorn in her overbearing mother’s side. To make the character believable, Ferrera was forced to shed any reservations about her body shape. Calling from Los Angeles, she opens up about how she was able to do that, and then some. Real Women Have Curves opens in theaters Nov. 8.

QUESTION: First off, you have a great first name!

ANSWER: Oh, thank you. You know, I always got made fun of when I was younger because of it. Kids can be cruel. I used to use my middle name (Georgina) when I was growing up because I so hated my real name. But now that I’m older, people see it as a cool thing. I really like it now.

Q: What kind of audition process did you go through for the film?

A: It was a month of auditions. My first one was on a tape I sent them, then I got called back in eight times after that. It was so strange, because the casting people never tell you what they are thinking during the audition. I always felt good during it, but I would come out and see five other girls. I’d think, “Oh, no, what if they felt good about their auditions, too.” Finally, I learned you just can’t make assumptions.

Q: How did the film change your life?

A: It taught me how to iron (she laughs). Also, going down Sunset Boulevard — that’s a big street that everyone drives down — there is this huge billboard of the film with me on it. All my friends saw it, and I got a lot of calls. Personally, though, there were a lot of challenging parts I had to overcome. Like the one where we all take our clothes off, and the love scene with the boyfriend. I grew from them. In the end I came out with a greater appreciation of myself, because it’s a movie that celebrates imperfection.

Q: What do you and Ana, your character, have in common?

A: Knowing what it feels like to be discouraged when you have a goal or a dream and not many people are supporting you. I had so many people try to convince me that I would never be successful. Like Ana, I had to really tune them out and go for what I wanted.

Q: Are you worried about what comes next after the hype subsides?

A: I’d like to do something completely different. With a film like this it’s easy to get pigeonholed and typecast. I want to make sure I don’t get carried away and just take anything. I want to keep my head on straight and choose projects that I can enjoy doing. I’ve looked at some stuff, but I’m just waiting for something cool. I’m starting school in January at (University of Southern California in Los Angeles). I had to take this semester off for this, so if I have to take another semester off, I want it to be for something really good.

It was such a pleasure speaking with America Ferrera, wish her much success in her career in Hollywood.