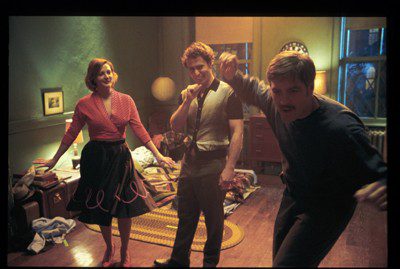 NOTE: Before blogging, I used to be an entertainment reporter for a daily newspaper, where I interviewed dozens of actors. Enjoy this article “from the vault!”

Drew Barrymore has no secrets. That’s why her fans love her so much. Whether it’s talking about her crushing early days as an adolescent party girl or her transformation into a modern-day flower child, the 27-year-old is up for dishing about anything. Currently, her topic of choice is not the obvious (Charlie’s Angels: Full Throttle), but a smaller role in the new film Confessions of a Dangerous Mind, in which she plays the naive girlfriend of TV producer and supposed CIA hit man Chuck Barris. Calling from a New York hotel room, the dimpled actress shares adventures and insight into the project and her life.

QUESTION: What was your goal for this character?

ANSWER: Well, my character is actually a combination of different women in his (Barris’) life. She could have come across in so many ways, being victimized and very bitter. I wanted to play her as a light, loving spirit and a grounded reinforcement in his life. I wanted her to approach situations calm and from her heart. I really hope I achieved that. I think other people probably would have played her much different.

Q: That time period seemed to fit you perfectly. Did you enjoy it even if it was just make-believe?

A: By all means, yes. I think that time period of hippies, the beatnik era, was poetic, stimulating and the start of something new and amazing in art, literature and attitude. The hippie times were an incredible time, the way they didn’t want war and they came with love and affection and flowers. Just positivity and solution and peace. I would love to see them right now, everywhere, because we need them back.

Q: What are your favorite memories of The Gong Show?

A: I loved this one kid who came out and did a Jimmy Carter interpretation. I loved those people — I mean, if you wanted to eat a Popsicle, wear a bear suit and ride a unicycle — you had a place to go to, knowing you might get annihilated. But I still thought it was just so fun and playful.

Q: What would your Gong Show act be?

A: I think I would dress up as a flower and stand there and water myself. And I would get gonged.

Q: I remember when you were on Oprah during the mid-’90s, and an audience member stepped up to the microphone and began to cry when it was her turn to ask you a question. She looked up to you so much. And then you started to cry, too. Are you still that sensitive with your fans’ adoration?

A: Wow. I just choked on my own breath when you said that — thank you for remembering that. It was a special moment for me. It’s still the most profound thing; I’m not used to it at all. Just today, the guy who was giving us a ride to work said his son was so excited that we were all in the car together. It blew my mind. I just never expect that. It goes right into my heart and makes me so happy. I’m so grateful when people are willing to express that to me.

Q: What is something about you that most people don’t know?

A: My photographs. I shoot them, develop them and put them in frames, and give them as gifts to people. I also love sending letters. I like typing them on old typewriters and using stamps and envelopes and stationery, and sending them off in the mail.

Here is more from the interview:

When I’m not working I like to: Take pictures, as in photography. My goal is to put together a show. I had been working really hard on that but then I had a house fire and lost all my work. It was so frustrating for me. It took me a minute to get back on the horse, but I’m starting to put together a collection again, a body of work. I love the idea of having my own show, I’m not sure if I’m ready yet, that’s a big thing and I want to make sure it is really, really good. But it’s a very important goal for me.

My favorite room in my house is: I think right now it’s my bedroom, I have a lot of little pictures on the wall and all my books — I finally got some bookshelves for them. It’s got some of my writing in it and my desk and my collection of old typewriters. My room also has pictures of my friends and photographs I’ve taken. It’s all coming together. Everywhere you look, there’s something to look at. It just feels really cozy right now.

My favorite celebrity perk is: That, all around, it’s a very privileged life. There is that polarity and negativity that comes with it, but you have to accept it and be Zen about it because you can’t have all these wonderful creative outlets and fun things to do and wonderful people to work with, and not have to give something up for that. It seems almost fair in a way, even though things happen and moments get exposed where you wanted to keep things sacred and private. That can be painful. But in the long run I feel so lucky to have this life.

If I were on Survivor, my one luxury item would be: Spot cream. Are you kidding? I can’t go without my special acne-fighting potion. Screw lipstick, I need my zit cream! Hmmmm. Wait. You know, once you’re out in the jungle, you probably don’t care about that. OK, I change my answer. I think I should bring a Swiss Army Knife instead. Screw the zits, I want a knife.

I’ve been listening and reading: This band called Built to Spill. I love their album called Keep It Like a Secret. It’s soooo good. I’m pleading to anyone who reads this to go out and buy their album. You’ll love it. I also like this band called Interpool. As far as reading, I’m in the middle of a few books right now. I’m an avid reader but I haven’t been as consistent as I usually am. But I did just finish a book called Run River, by Joan Didion; it was really a great book.