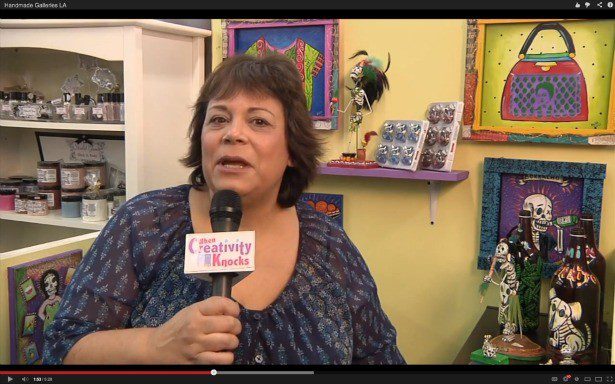 Why I love Handmade Galleries (& my Miley Cyrus story!)!

This was the coolest surprise EVER! Ana Araujo from When Creativity Knocks visited one of my favorite spots in Los Angeles – Handmade Galleries!

Patrick and I have had a space there for several years now and we love it. Owner Andrea Spyros is an amazing businesswoman who has the goal of helping each artist flourish into a larger, broader career with their art. She has certainly helped us. We’ve had several A, B and C list celebrity clients, our art space has been featured as the backdrop to several kooky reality shows, plus numerous other connections and artsy opps, all thanks to this wonderful art space!

Okay, since we’re on the topic of Handmade Galleries, let me tell you my Miley Cyrus story…sigh…

Remember the giant photo shrine I made for CHA a few years back? 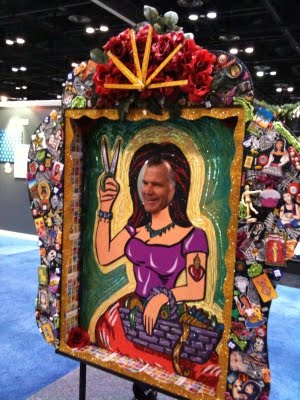 After the show, we sent the piece to Handmade Galleries and they displayed it in a prime juicy spot. One day in summer 2011, I received a phone call that Miley Cyrus was standing right there, admiring the shrine I made and wanted to know if I could make one for her new home, for her sanctuary room. I was so excited! Of course I would!
Throughout that summer, Miley TEXTED me what she wanted on her shrine, the glitter color, and even snapped inspiration pictures from her travels in Australia and sent them my way from her iPhone. She was very sweet and friendly. I loved how excited and serious about this piece because she wanted happiness and peace in her new house. I was so honored she wanted my work to be a part of that!
Now comes the part where you’ll want to smack me in the back of my head. This is VERY unlike me, you guys KNOW me, right? I normally would be all over this. At the time this was happening, Maya was going through her first love drama – lots of drama.
ME: Mom Worry Overload! I hung on to the string of the emotional yo-yo by the tips of non-glittered fingernails. Dealing with her moods and everything that was going on during the break-up, I lost all my inspiration. Just like that, it vanished. I had zero motivation to make anything, to write anything, to blog, to leave the house, to travel, etc. The only work I did was for my daytime job, no energy leftover. In all my life and career, I’d never had that happen!
Bottom line? I never followed through for Miley.  I did make a doodle sketch according to what she asked for, but…never sent it. 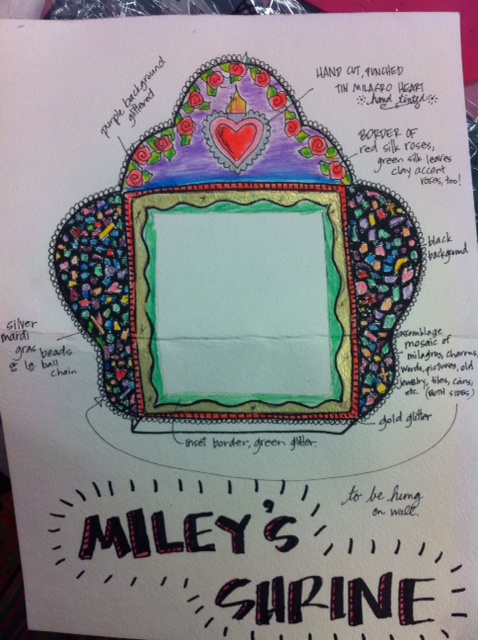 You know I had to be in a not-so-sparkly place to drop the ball on such an exciting order, right? I did apologize and by the time I tried to redeem myself (oh, like, eight months later), it was too late. She must have thought I was a jerk!
Argghh! So frustrating. Wasn’t meant to be, life goes on, live and learn and all that. I moved on. I’m soooo happy that era ended and I got my mojo back! The silver lining is that I now have a fun story to share about how I almost made an art piece for Miley Cyrus!
Here’s a question for all of you. Do you have a story about a missed opportunity? If so, please share in the comments!
Let me steer this back on track…here is the wonderful video Ana made about Handmade Galleries! If you are ever in Los Angeles, check out the space. It’s bursting with cool, handmade art!

Here is the link!