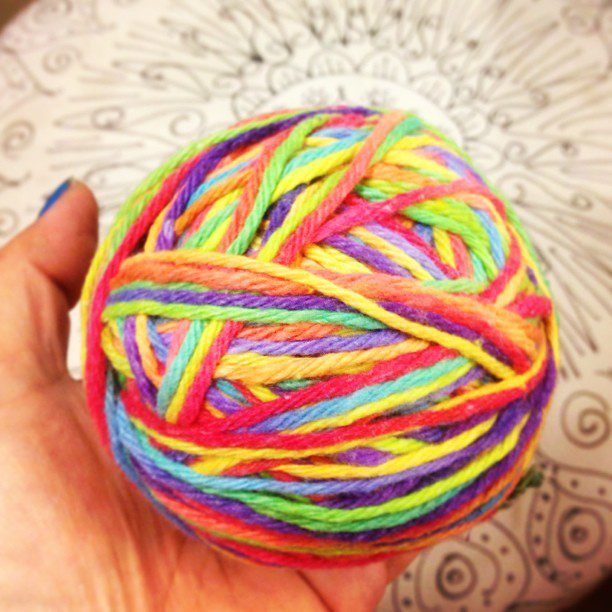 IF KNITTING IS THE MARCIA BRADY of crafts, crochet is the Jan: Misunderstood, overlooked and often perceived as nerdy as a stitched-up granny-square vest.

One-handed loopers are whipping everything from shrugs to skulls out of yarn, plastic bags, wire, rags and even polymer clay. Some carve their own hooks out of chopsticks. And for those who get stuck on a project, there is crochet911.com for a midnight crafty crisis.

The New York Times recently profiled pedestrians sporting crochet fashions, and Yarn Market News has just published the article “Crochet: The New Knitting.” Even Martha devoted a show to the topic and admitted she picked up some basic lessons while in prison.

Another reason for the spike in interest could be that crochet is just plain easier than knitting. Think about it: You only have to deal with one hook and never have to cry over dropped stitches.

“It has something to do with the whole knitting boom,” she says from her publishing offices in New York. “When you see things in crochet that can absolutely not be made by knitting, there’s a curiosity to learn. Millions of women have taken to knitting the past couple of years. A good number of them are looking for new ways to extend their craft, and crochet is a wonderful one to learn.”

Stoller is such a firm believer that she has just written a book on the topic called Stitch ‘N Bitch Crochet: The Happy Hooker, which is to be released in January by Workman Publishing.

All the hype is nice, but to Jessica Flores, crochet has always been cooler than a thread yarn bikini.

“Being a 24-year-old graphic designer, one may think it’s odd that I spend my Friday nights with a friend, a bottle of wine and multiple skeins of yarn, instead of partying the night away at a local club or bar,” says the Phoenix artist. “My grandmother taught me to crochet when I was 12, and I’ve been doing it ever since. I’m happy it’s becoming more popular because there seem to be more yarn stores, and I don’t feel so odd at times. I noticed recently that when I tell someone, ‘I made this,’ they say, ‘Oh cool, I’m learning to crochet, too!'”

According to a 2004 survey by the Craft Yarn Council of America, 53 million American women have picked up knitting and crochet, a 51 percent increase over the previous 10 years. The secret spark is attributed to a younger demographic of females who are following in their grandmothers’ stitches. But even though celebrities such as Vanna White, Madonna and Rosie Perez hook for a hobby, crochet has always been hidden in the big sister shadow of knitting. Even when it comes to chatting up the national Knit Out and Crochet event, Mary Colucci, executive director of the CYCA, says many folks tend to refer to it as the Knit Out, which makes devoted crocheters cringe.

“It has always been that way, unfortunately,” says Lily Chin, author, designer and award-winning speed crocheter. “Historically speaking, in the United Kingdom crochet was looked down upon as what the servants did. It was a class thing. Primarily the Irish crocheted. Modern day? Let’s face it. Crochet hasn’t always had the best name, because of some of the byproducts like toilet paper roll holders. Some people see it as folk art. But for high fashion or high art, we have to get past that. The ultimate mission is to show the full range.”

Chin, 40, crochets 132 stitches a minute — often with a Ramones CD playing in the background — and has a new book out on the subject, Knit and Crochet With Beads (Interweave Press, $21.95 paperback). The New Yorker recently showed off her skills on Martha when she created a dog poncho in less than an hour. She says she mingled with the show guests as they waited outside, sweating in their handmade ponchos before entering the studio. Despite the pressure to perform, Chin vows it was worth it for the craft.

“That Martha poncho alone will generate more interest in crochet,” she says. “People didn’t realize what sweet things crochet could do. I think Martha herself gained more respect for it after being in prison. She told me herself that she was in awe of these women who did this amazing thread crochet on steel hooks there.”

It’s great that crochet is finally earning respect, but many feel it has a long way to go. Kim Werker, 29, founder of CrochetMe.com, a contemporary crochet community, knows how to speed up the process.

“Although I’m seeing more and more attractive uses for them, I wish the granny square would take a five-year vacation,” she says. “We need to focus on new crochet so we can bust open the stereotypes that crochet is uncool, outdated and only for unimaginative old ladies.

“When we’ve made some headway there, then the granny square can come back. As long as it’s used in new and exciting ways.”