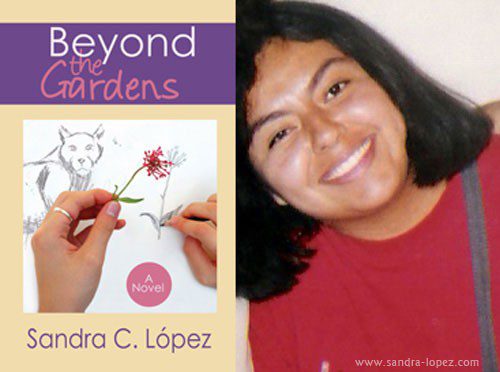 Today’s guest is an author with amazing spirit and spunk! She wrote and published her first novel while in college and is working on her third. In addition, she runs a book blog where she shares reviews of all the pageturners that capture her attention. This is a great article to share with the young, aspiring writers in your family because Sandra is proof that it’s never too early to manifest one’s dreams. Way to go, Sandra! Her essay is below…

Coming back a celebrity

For those of you who have heard me speak at a book signing or an author panel, then you know the story of how I got into the writing gig. But for those of you who are just joining us, I’ll tell it again.
I started writing my first teen fiction novel, Esperanza, when I entered my first year of junior college, fresh out of high school. The book was about a 14-year old Mexican-American girl who wanted to get out of the barrio and make something of her life. I wrote this story without the help of a computer while taking a full load of classes five days a week. When I finally finished it, I stacked it on the shelf so it could collect dust forever. I had absolutely NO intention of having it published as being an author was something I thought I could never do when I was growing up. But, one day, I decided to pitch it to some publishing houses out there. Out of 40 letters I sent out, 35 came back rejected and the rest didn’t come back at all. I was about to give up on the whole thing when I got a call from the editor of Floricanto Press asking to see the rest of my manuscript. Four months later, I received a contract. Then two years after that, I was holding my first published book. And all this happened WHILE I was still in college!
Since then, I have written a sequel to my first book called Beyond the Gardens, and graduated with a Bachelors degree from Cal State Fullerton. To this day, I spend my free time visiting colleges and local libraries talking about my books and the writing process.
A common misconception most people have about authors is that they are rich. That’s so not true. I don’t have a butler or a chauffeur or diamond earrings or a mansion made out of gold. Would I like to have all that? Hell yeah! Yes, I would like to be on the best-seller’s list. Yes, I would like my books to be transformed into movies. And, yes, I would like to make all that money from just sitting on my butt and writing! But, alas, like most other writers, I do have a day job. I just do events whenever I can.
Now, I don’t think much has changed since I got into the writing business. I mean, it’s not like I get stopped on the street whenever a fan recognizes me. I’m still living a normal, everyday life. The only difference is that I get asked for autographs more often. Let me tell you, it’s way different than when you had to sign yearbooks in school. And I feel honored every time.
But does this make me a “celebrity?” Well, a few people do, especially the kids. I actually came back a “celebrity” when I went to go visit my old school district.

Sometime ago, I got an email from a lady that works for the district. She was ecstatic to learn from the Internet that I was from the local area and now an AUTHOR. She called me a great role model for young kids and absolutely insisted that I meet up with her to discuss a possibility of talking to the classrooms of the district. So that’s what I did.

I met up with Ann (that’s her name, BTW), who hit the floor at the first sight of me (maybe I should’ve brushed my hair or something, or it might have something to do with the fact that I’m some sort of celebrity now.) Anyway, after she breathed a few times, I proceeded to talk about how I got started in writing and what, if anything, led me to take on this goal when I was in school. For a second, I thought Ann was going to have a stroke. Apparently, she couldn’t contain herself because before I could even say anything else, she rushed to the phone to ask if the superintendent could spare a few moments to meet me at that point. Then ten minutes later, we met up with the superintendent, who I relayed my life story and writing career to. Both of them were so amazed by my accomplishment that they purchased 8 copies of my books right on the spot. Even the secretary was in awe. And when I told him that I was the designer of my website, they were that much more impressed.

By the end of the meeting, they referred me as “a product of their school system.” It actually made me wonder: Did I have anything to do this, or was it all them?

In any sense, it was good to go back and recall all those memories in school. I even met up with my old Vice Principal in Jr. High. Of course, he didn’t remember me, but I remembered him (vaguely). See, I’m not that old.

It’s going to be great to speak to the students next year. I will tell all of them that it IS possible to make something of yourself and come back a celebrity.

Sandra’s Bio: Born and raised in Hawaiian Gardens, CA, Sandra C. López is one of today’s influential Latina authors in Young Adult literature. Her first novel, Esperanza: A Latina Story, was published in March 2008 WHILE she was still in college. Shortly after that, she wrote the follow up to Esperanza called Beyond the Gardens, published in October 2009. Now, this young writer is a full graduate of Cal State University Fullerton with a BFA in the arts. She was named as one of “2011 Top Ten New Latino Authors to Watch” by Latino Stories. See Sandra at the Tucson Festival of Books.