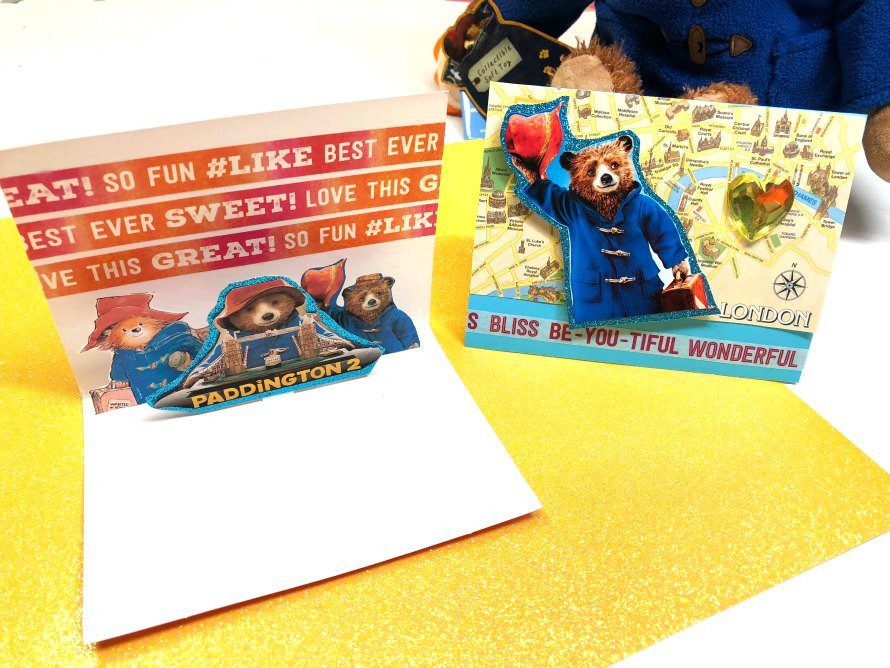 This post is in partnership with Warner Bros. Pictures.

This Paddington 2 craft is the perfect craft for this week because the new movie opens on Friday, January 12th! Scroll down to the bottom of this post find a link to free PDF printable activity pages. It’s always exciting when a beloved children’s book is given the big screen treatment, and Paddington slayed the box office both critically and commercially in 2014. We’re talking a worldwide success, it’s known as one of the most successful family films of all time.

And now everyone’s favorite Peruvian marmalade-eating bear is back with a new lovable misadventure to share. I suggest watching the first movie before you see the second, make it a Paddington kind of weekend! This time around, Paddington is cozy in his new London digs, happily living with the Brown family. He sets his sights on a London pop-up book to buy as a gift for Aunt Lucy, and takes on a string of jobs to raise the money. But just as he earns enough cash, he witnesses a thief steal the book. Even worse, Paddington is accused of the crime!

I loved the idea of the pop-up book and used it as inspiration for this project. This is a pretty easy craft, and you can sit down and make a batch of these to giveaway to friends use as party invites for a Paddington 2-themed birthday party, or as a kids craft. Especially after you return home from seeing the movie!

How to Make a Paddington Pop-Up Card First, use a computer photo program to lay out your Paddington pictures to fit on a sheet of photo paper. I found these images on Google (they are for personal use only!). Print and then cut out each shape.

Make two snips in the middle of the card, and then open it and pop the tab so it protrudes out from inside the card. This will be your base to glue an image.

Add adhesive to the front of the tab and press the image in place. Open and close the card to make sure it works! For the front of the card, I printed out a small map of London and used it as my background paper. Then I lined Paddington with glittered card stock and used washi tape for a pop of lettering. Thick foam core tape came in handy to give a 3D look to Paddington! This next card, I snipped three tabs. Here’s what it looks like with three images. You can really detailed and add even more images with different heights. Why not add some more personality? That’s where washi tape comes in. I kept with the colors of red, blue and yellow for my accents.

Check out the sweet stuffed Paddington Warner Bros. Pictures sent me. Can you tell I’m excited for this film? Tickets for Paddington 2 are now available! Get them for the whole family today: paddington2tickets.com

From Peru to London, Paddington makes the world a brighter place!