Last week I received an email from my cousin Stephanie about “random acts of kindness”. We’ve all heard about it and probably have ‘paid it forward’ many times. But what I thought was so cool was her example of a Starbucks where one person paid for the person’s coffee behind them – just because!

This is something I always wished I could do, but usually every single penny (I’m not kidding) is allocated to the essentials – family, roof over our head, meals, etc. But this year, the Murillo household has had many blessings. We haven’t exactly hit the jackpot, but we are able to buy namebrand cereal these days! Yay, Kelloggs!

Who knows what the future holds. In the crazy state of this world, anything can change on a moment’s notice. So if there was ever a time for me to splurge for someone else’s Starbucks, it is now.

In past years, I’ve passed out handmade ornaments during the holiday season to anyone who was nice to me. This year because of lack of time to make merchandise, I went for gift cards and cold cash. And I didn’t do it to people who were nice to me, but people who I thought deserved a happy surprise during their Christmas Eve work day.

So here is how I distributed them! 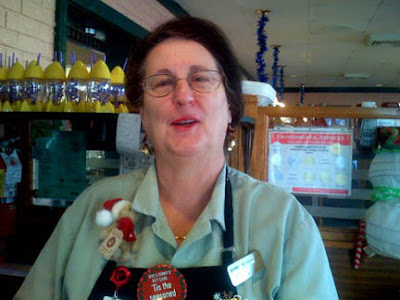 Meet Wanda.
This morning at 7:30 Patrick and I took the kids to breakfast at the Denny’s by our house. Wanda was soooo sweet. She has a grey beehive, bright red lipstick, super flashy sequined earrings, and a Christmas pin that had blinking lights. After our meal, we paid and left her a 20% tip. I signed the slip, and asked the cashier if I could talk to Wanda. Wanda came over to the counter looking a bit frightened, wondering what the heck I wanted. I told her I was practicing random acts of kindness today, and I handed her a $10 bill. “Merry Christmas!” I said.

She squealed as if I were Oprah handing over a million dollar check. Wanda wove the bill in the air and annouced it to those around her. She thanked me over and over. 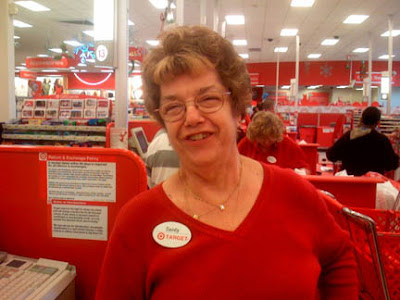 Here is Sandy.
I went to Target to buy the last of my gifts and chose four of the niftiest gift cards they had. The kind that play music and have games built into them. Sandy was my cashier and I asked her to ring up $5 on each one. The line was gawd awful long and I noticed the beads of sweat trickling just under her hairline. I paid, and she handed me the reciept with a cheery “Merry Christmas!”

I reached in the bag and pulled out one of the gift cards and presented it to her and gave my RAOK spiel. She threw her arms in the air and went “Woo-eeee! Thank you!!” She then looked around sneakily and stuffed the gift card in her pants pocket. 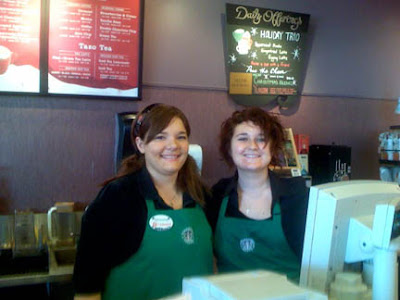 Here you go, pretty Starbucks girl.
I was at Starbucks and I saw the girl on the left making a coffee drink. Watching her was a guy with a scowl on his face and two bitchy-looking chicks next to him – all giving the barista stink eye. Pretty Starbucks girl’s face showed she felt their hatred. She finished the drink and set it on the counter and told him: “Here you go, Sorry about that, I hope this one is better…” Dude snatched the drink and said “It better be right, I can’t believe you can’t even make a f…… coffee drink!” He then stormed out with his chicks behind him, giving her dirty looks the whole time. She blinked away tears and proceeded to tell this other man that the guy didn’t think his drink had enough espresso in it, even though she made it the right way. She said she made him a whole new drink with an extra shot just to please him, at no charge, and he still was mad. She was super shaken up.

Three drinks later, she called out my name and I gave her the card and told her not to let that guy ruin her day, that she was doing a great job. She relaxed in that instant, giggled and thanked me. I think it was her dad standing nearby because he came over and told me thank you too. I asked to take her picture for my blog and she said: “Here, let me get my friend in the picture too!”

The next card I gave to my sister Theresa to give out. As of this moment, she said she hasn’t found anyone worthy of the card yet, and that is after a long day of shopping. Sometimes it is not about finding nice people, it can be about seeing someone who could use a little pick-me-up. Maybe one little gesture will help them change their ‘tude.

When I was in high school, I used to work at a Jack-in-the-Box and always got stuck working on Christmas Eve. So I decided to visit that same JITB and give a card to the window clerk. I ordered our food (it was a very unhealthy Christmas Eve in case you didn’t notice) and pulled up to the window.

ME: “Hi! When I was in high school, I used work at this very window on Christmas Eve! Here is a $5 gift card – just because! Merry Christmas!”

HIM: “Oh. Ok. (he tosses it on the cash register) Can you pull to the side and we’ll bring your order out to you.”

So that one didn’t exactly have the Frank Capra holiday magic, but it’s cool. Maybe he’ll buy something that makes him happy, and he’ll think of this random act of kindness that came his way

I titled this blog post “selfish surprise” because it totally is selfish, just like Oprah says. It feels so GOOD to do something nice just out of the blue. The rush on people’s faces when you tell them what you are doing…dang, you just want to do it over and over.

I truly hope someday I reach a position where I can give more than $5 gift cards!!

Until then, they will do just fine.

Wish Upon A Star Bracelet

An open letter to Ellen DeGeneres

5 thoughts on “Random Acts of Kindness”