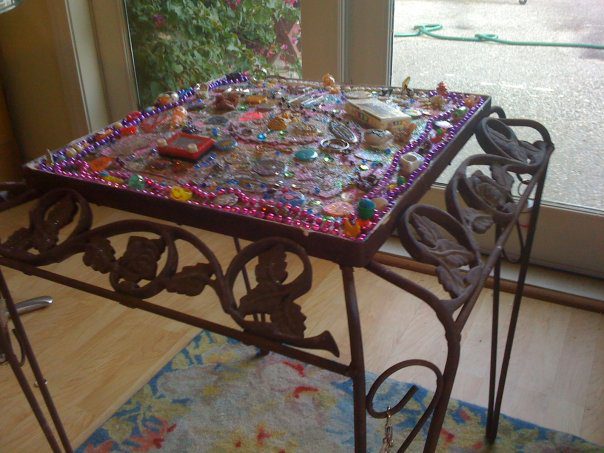 Movie director and screenwriter, allison Anders is one of my all-time faves. From Mi Vida Loca to Grace of My Heart, she knows how to tell a great story. Imagine how giddy I was when I met her on Facebook!

We emailed back and forth and she told how she loves to craft and how she gets goosebumps from glitter too. I sent her a batch of Crafty Chica goodies and even made her a purse! 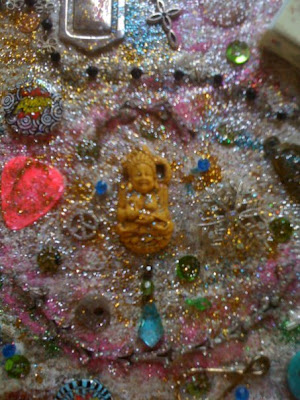 Tonight she sent me picture of what she did with the glitter. She made this wild mosaic memory table and used the glitter throughout to accent the pieces.

“I used Crafty Chica glitter as the topper to make everything sparkle – and I used every color I had cause I love them all sooo much!

The Mardi Gras beads around 3 sides are actually from Vegas, specifically the Imperial Palace during Cinevegas ’05, where I watched as 3 young indie filmmakers and my friend Hunter drank White Russians and played blackjack — each time one won they gave me their beads. Which — was not often enough for how late we stayed up that night and I was on jury duty too! We awarded “In Memory Of My Father” by Chris Jaymes the grand jury prize the next day. Herein all these memories are preserved.

The pale pink and pearly white rosary at the top Devon gave to me.”

Those of you Mi Vida Loca fans will be excited to know that Allison has reunited her cast for a sequel. It’s called Smile Now, Cry Later. In the meantime, here is the trailer for Grace of My Heart! (Matt Dillon is so cute in those Buddy Holly glasses, isn’t he?)