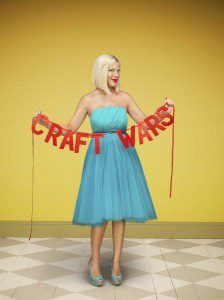 The day has arrived! The premiere of Craft Wars on TLC (Tuesdays, 10/9 CT)!

Craft Wars is new craft competition show where three DIYers go glue gun-to-glue gun against each other to win $10,000.

Tori Spelling serves as the host and executive producer… and I’m not gonna lie – at first I rolled my eyes when I heard this news months ago. Donna Martin, crafting? Really? But after watching a sneak peek of the first episode, I changed my mind. She’s adorable on camera as the ringleader of the glitter-filled race-against-the-clock adventure. She keeps the action rolling!

From the official web site:

TLC is about to turn crafting on its head. Long gone are the days where crafting solely referred to a world of quaint tea cozies and popsicle stick bird houses. Today, there is a strong movement of crafters taking this beloved hobby and transforming it into an extreme art form. Now, for the first time ever, TLC has assembled these craft virtuosos for a knock-down, drag-out fight for supremacy.

Here’s how the show works: Three contestants are introduced and then presented with a Pop Craft Challenge, where they have to create a specific object within an hour. They must use the supplies provided, but they also have access to the ginormous Michaels Craft Closet that has every goodie and gadget you can think of! Once the buzzer rings, the judging panel Erica Domesek (P.S. I Made This), Stephen Brown (Glitterville) and Jo Pearson (Michaels) analyze each contender’s every move and decision.

There is no crying in crafts. Until now.

Judges—->>> Hard.core. They don’t hold back the cut downs. Not only towards the contestants, but to each other. Erica is more minimalist in style and Stephen loves everything dripping in glitter, so yeah, the verbal paper cuts happen. Fast and sharp. But this is Craft WARS, people – and to compete, you need to have a thick coat of armor. So even though you may cringe in your seat at the tough love, it’s entertaining. And well, honestly – break out the notepad. You’ll learn from the contestants of what not to do. READ: Hot glue and tennis rackets: No.

After the intense Pop Challenge, one teary-eyed contestant is snipped off the roster and the remaining two are left to duel it out for the Master Craft Challenge. They are given five hours and a highly-caffeinated team to construct an over-the-top something or other. If you watch Cupcake Wars, this show is by the same team and follows that pattern.

I love that Craft Wars puts crafting front and center for peeps beyond our hobby and industry to see. And not on a home dec channel, but a general market channel. I hope it brings fresh energy into the world of paper, glue, glitter, clay and beads. I like that the team behind the scenes are tried and true crafters, the details are amazing…lots of TLC (seriously!). And I really mean it when I say that you’ll pick up a lot of great tips of do’s and don’ts. On most craft shows, we see the “expert” demo a project and it’s perfectly completed. But when we try that project – we sometimes end up HERE.

On Craft Wars,  we see the real-life poop that happens from a craftastrophe and the drama that follows. There was one instance, when I actually talked to my computer screen to the contestant “What? You think you’re gonna have time to finish that? Hahahah!” and at the end, I noticed my fingers were crossed for the contestant who I wanted to win. I’m a nerd.

In case you’re wondering why I’m not on the show…I didn’t apply. I was contacted by the producers last November and they did a great job getting me excited to get me to send in my video entry, and I almost did, but…I changed my mind. I’m such a middle-child, I’m a softie when it comes to criticism. I can’t even handle when I get dislikes on my YouTube videos!

Crafting is my escape from stress. It’s one of the few things I feel really proud and happy about. If I got chewed out for bad design or craftsmanship, I don’t think I’d ever craft in peace again without hearing their voices in my head. I know, I’m overthinking! But I crack under pressure, I don’t think I have it in me to make – in one hour – a sturdy, on-trend duffel bag from scratch from a shopping cart of sports equipment. And then to have my mess shown and judged on national TV? I would embarrass my family! And I don’t want to compete. Peace, love and glitter. I just want to make stuff I like when I like, how I like. See? I’m a nerd!!!

I don’t have the proper armor to compete in Craft Wars. However, I 100% respect and admire those who do and that’s why I’ll be sitting at home with my family every Tuesday this summer soaking up the show! Many of my friends are in the episodes and I’m excited to see them work their magic! I’m so proud of them!

If you love crafts, reality TV and juicy drama, this show is for you. Let’s all watch it together. Let’s make a craft while we watch! The TLC web site has a lot of great DIY projects! 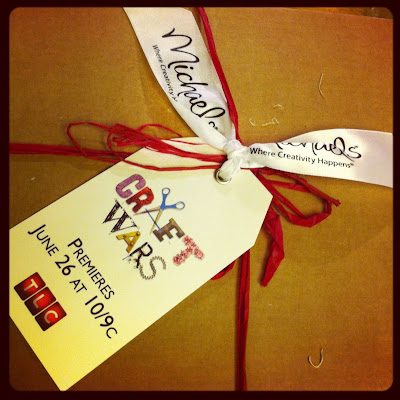 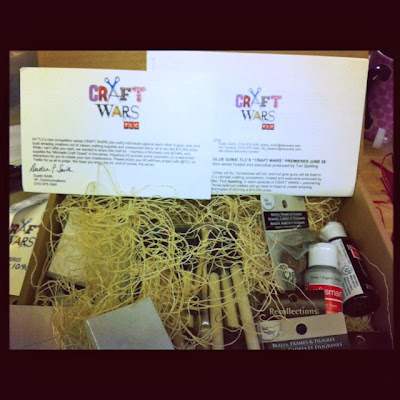 What do you think of Craft Wars? Are you going to watch? Leave a comment and let me know!

Good luck to all the contestants! I hope they renew the show for more seasons!