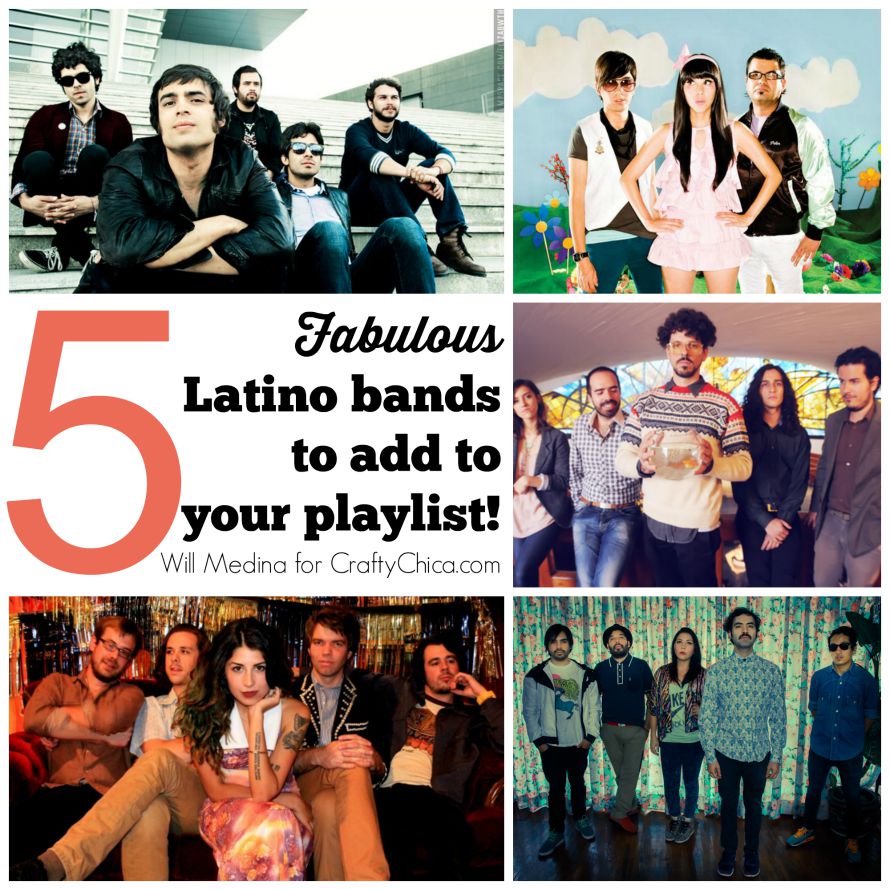 5 Latino bands to add to your playlist!

By Will Medina, Special for CraftyChica.com

With summer in full force I wanted to have a little fun and find some unique and popular Latino bands. Often we tend to stick to our well-known mainstream acts, but I decided to embrace the unknown (to me) and seek out some amazing Latino groups. These five groups have been building a following of fans and each one is bringing their own flavor to the ever-changing music scene. Also, if you don’t understand Spanish you can still appreciate the amazing sounds each of these groups. I hope you check out each one of these bands and add a few to your current summer playlist!

This month again I have included a Spotify playlist for you! If you don’t see the player below, click here to access it.

Jessica Hernandez and the Deltas

Hernandez is the first-generation American daughter of a Mexican mother and Cuban father. She grew up working in her family’s bakery and restaurant, singing in choirs and performing in plays and musicals in school. Jessica Hernandez and the Deltas brings this touch of Motown, tough vintage R&B, Latin grooves that come through each one of their songs. More info on Jessica Hernandez and the Deltas: http://jessicahernandez.net Video: https://www.youtube.com/watch?v=j-v76IVtV-Y

Belanova is a Mexican pop Grammy award-winning band that formed in the city of Guadalajara, Jalisco, in 2000. The group consists of Denisse Guerrero (lead vocals), Edgar Huerta and Ricardo “Richie” Arreola. Belanova sound is so contagious and it just makes you want to get up and dance. More info on Belanova: http://belanova.com.mx Video: https://www.youtube.com/watch?v=QrvXTGf7BHU

Torreblanca is a Mexican rock/pop/alternative independent band created in late 2007. They are a feisty young group of 5 musicians -very different from each other- however (yet), they comply in an awesome way to create a unique and fresh sound. Torreblanca brings this unique sound that is very upbeat and the use of various instruments really brings out the fresh new sound. More info on Torreblanca: http://torreblanca.tumblr.com Video: https://www.youtube.com/watch?v=meDZPbTgJIs

Jefes del Desierto is a Mexican band formed back in 2010 and made huge steps towards putting out their debut album, which they finally did in 2014 with Amantes de las áridas soledades. Jefes Del Desierto brings the sounds similar to The xx and they describe themselves as “acid urban Mexican folk.” More info on Jefes Del Desierto: http://www.jefesdeldesierto.com Video: https://www.youtube.com/watch?v=z0bU14rc1O4

Enjambre is a Californian-born Mexican band comprised of the Navejas brothers. They began playing in close to the border of Mexico and their music is dominated by Mexican culture and all of their songs are sung in Spanish. Enjambre brings the sounds similar to The Killers, which again is very contagious with the upbeat tempo and relatable lyrics. More info on Enjambre: http://enjambre.mx Video: https://www.youtube.com/watch?v=LoUgRNpEgKE

Well, I hope you enjoyed tagging along with me during this journey of amazing Latino groups. My advice on finding new music is don’t be afraid to step out of your comfort zone. Venture off to uncharted lands. Some of my favorite bands were found accidentally while I explored new genres and sounds. I hope you check out each one and maybe find a new favorite group!

Until next month! I hope you have a great rest of July and stay cool!